No asylum in Ireland’s education system 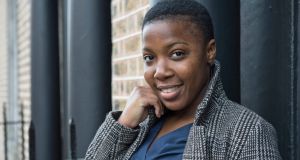 Samantha, a young asylum seeker, lives in the direct provision system. She was accepted to study in Maynooth but cannot afford the fees. Photograph: Brenda Fitzsimons

You’ve fled war and poverty. You’ve taken your children across the sea on a rickety boat and hoped to survive. After many sleepless, hungry distressed months, you find yourself in Ireland and thank your lucky stars that your children will have an opportunity to get a good education.

Your hope is misplaced, because children living in Ireland’s direct provision centres, where families are not allowed work or even cook for themselves, can barely afford the basics of education and are effectively locked out of third-level.

“I have lied to my children,” says one father living in a direct provision centre. “I tell them to study hard because some day our situation will change and they will be able to go to college. I have told this to all of my three daughters now. I have given them false hope.”

People in the asylum process don’t qualify for the “free fees” initiative, which effectively puts third-level out of their reach.

Nor are they eligible for the student maintenance grant or the back to education allowance.

Some asylum applications can take eight years or more to process and, during that time, asylum seekers are not allowed to work or access free education.

In 2015, the Department of Education announced details of a new student support scheme for young people who have spent five or more years waiting for their refugee application to be processed; there were 39 applications but only two students met the strict criteria.

The problems start as early as primary school. Jennifer DeWan of Nasc, an immigrant support centre, says that while primary and post-primary education in Ireland are nominally free, there are hidden costs.

These will be familiar to any parent in Ireland: so-called “voluntary” contributions, school uniforms, books and extracurricular activities.

“Asylum seekers cope by finding schools which have book rental and uniform donation schemes, but people who are new to Ireland don’t always know this,” says DeWan.

“In secondary school, children living in direct provision often miss out on extracurricular activities when there are poor transport links between their centre and the school. A lot of children miss out on swimming because it’s one of the most expensive activities.”

The summer holidays can also be a difficult time for parents living in direct provision, because they cannot afford to send their children to summer camp with their friends.

Some organisations like Doras Luimní, a support and advocacy organisation for refugees and asylum seekers, have been stepping into the breach by linking up with local community groups to provide activities.

“The people are ahead of the politicians on this,” says Aideen Roche of Doras.

“Young people in this system have one room to call home which in a lot of cases they share with their family,” adds Caroline Reid of the Irish Refugee Council. “It is their space for sleeping, studying, relaxing and living. Trying to get quiet time or adequate space to study can be difficult especially as students prepare for exam cycles.”

Ombudsman for Children Niall Muldoon has said that 1,400 children are “spending the formative years of their lives in direct provision, in circumstances that inhibit their potential to thrive and curtail their full rights of basic employment”.

His office is currently hamstrung because it is not allowed to receive complaints from children living in direct provision, although legislation to change this is due to be introduced next month.

One young man, who was already 18 when he arrived in Ireland from Malawi, was told he was too old for secondary school.

Nasc has tried to get him a place on an adult education course but, in the meantime, he sits in direct provision, bored and frustrated.

Another person, a mother, has struggled to persuade her daughter that she should work hard for the Leaving Cert when the door to college is so firmly closed; those working in the area say this is commonplace and means that a whole generation of young people don’t have an opportunity to fulfil their potential.

Through donations and philanthropic grants, organisations like Doras, the IRC and Nasc have helped young asylum seekers escape the trap of direct provision and get into further education (due to the high cost of non-EU fees, there simply isn’t as much money to help as many into higher education).

At the IRC,one volunteer, Charlotte, administers donations made by the public to help with education access. The money is spent on course fees, books, transport, or whatever barriers are preventing the person from accessing education – sometimes it’s simply because they can’t afford a bus ticket.

Some third-levels are being proactive, particularly NUI Galway which, this year, introduced a scholarship for asylum seeker. DCU and RCSI have each waived fees for at least one student. But these are the exception.

“We see bright, motivated, enthusiastic young people who want to reach their full potential and prove themselves, but they are not allowed to do that,” says Aideen Roche of Doras.

“Instead, they have to sit at home and look at the four walls. It’s a bad policy which damages the mental health of young people and encourages long-term dependency on the state.”

- Samantha's story: The first year Samantha spent in direct provision she passed the time by reading fiction and taking a couple of zumba class.

She was living in the Ballyhaunis direct provision centre in Co Mayo where the majority of residents were made up of families.

Having left her loved ones behind, she felt desperately lonely. The 20-year-old decided to apply for Fetac courses and was offered a place in the Liberties College in Dublin.

“I had been studying a BA in psychology and labour relations in South Africa and applied to sociology and psychology in Dublin,” says  Samantha, who came to Ireland seeking asylum in 2014.

“It was better than sitting around in Co Mayo for a year and I was very keen to take on the challenge.”

The young South African applied for an accommodation transfer and moved to the Georgian Court direct provision centre on Gardiner Street in Dublin.

She studied diligently throughout the year at the Liberties College and was awarded nine distinctions and a merit in her final exams.

After attending an information day on NUI Maynooth, she applied to study youth and community work at the college.

She was unaware at the time that she would have to pay €12,000 per annum as an international student for the three-year degree course.

As an asylum seeker living in Ireland she neither qualified for EU fees nor the registration fees and costs Irish citizens pay.

She was delighted to discover she had been offered a place on the course when the Leaving Cert results came out in August 2016.

She applied to various charities and non-governmental organisations for support, though none was able to secure funding support for the young student.

She also contacted the former minister for education Jan O’Sullivan writing how “young girls in direct provision that are deprived the privilege to go to third level make a mess of their lives . . . some girls have even started selling their bodies for money just so they can sustain themselves and keep busy.

“At the start I had so much hope because there were so many options. I didn’t think me only being two years in Ireland or not having done the Leaving Cert would affect that. I thought that with my really good Fetac results I would get funding.”

She is now studying a Fetac level five course in health service supervisory and management skills in Dún Laoghaire, with the support of a local refugee project.

Samantha is determined to study in Maynooth because she wants to “prove that I can stand on my own. I don’t need to be held back by people who have influenced my life in a bad way”.

“Studying is an escape for me and allows me not to deal with reality. I’d rather be in school and not in the hostel where all I can see is people around me who remind me of the situation we’re all living through. At the end of each day now I just go home and pray to God.

“I feel like everything I worked hard for has gone down the trash and there’s nothing I can do to make things better,” she says.