Children would not study traditional subjects until aged 10, under new proposals 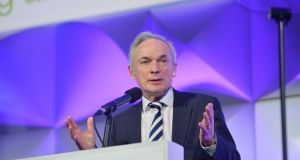 Minister for Education Richard Bruton: Proposed reforms to primary schools are based loosely on some of the features of top-performing education systems in countries such as Finland, as well as new research on how children learn. Photograph: Alan Betson/The Irish Times

Children at primary schools would not study traditional subjects until as late as 10 years of age, under proposals being considered by policymakers.

Instead, there would be a much greater emphasis on creative play during the early years of primary school, and broader areas of learning in later years.

The reforms are based loosely on some of the features of top-performing education systems in countries such as Finland, as well as new research on how children learn.

The proposals, drafted by the National Council for Curriculum and Assessment (NCCA), represent some of the biggest proposed changes to teaching and learning at primary level in more than two decades.

They also seek to give teachers more flexibility and autonomy over the amount of time dedicated to key areas of learning.

Educators, policymakers and parents discussed the proposals at a conference in Dublin Castle on Tuesday as part of a consultation phase which continues until the end of April.

The remainder of the school day would be designated as “flexible time” for roll call, assembly, breaks, discretionary curriculum time and the patron’s programme.

This would allow schools to spend additional time on the part of the curriculum which they feel best meets the needs of students. Controversially, it would result in religion being dropped from the core curriculum.

Another potential change involves a move away from traditional subjects in the early and middle phase of primary school, with a greater focus on themes or “curriculum areas”.

This is influenced by the fact that children are faced with studying 11 subjects when they enter primary schools, which some experts feel is too structured and may impede learning.

In a keynote address to the conference, Fergus Finlay, head of the children’s charity Barnardos, said the new proposals represented an exciting opportunity to meet the full range of children’s needs at a younger age.

But he warned that its successful implementation will depend on ensuring it is backed up by resources and reform.

Concluding the conference, Minister for Education Richard Bruton said the proposals came at a crucial time for the education sector given rapid changes in society and the workplace.

He said the focus on improving the transition between preschool and primary schools was particularly important.

“The primary curriculum has been a real strength of our system over many years,” he said.

“We are now, hopefully, building on that strength, giving people more of the flexibility and capacity to be innovative with their use of that curriculum in their own setting.”

The NCCA is keen to emphasise that the proposals are intended to begin a discussion about the redevelopment of the primary curriculum.

A report on the outcome of consultations and a more detailed overview of a redeveloped primary curriculum is likely later this year, which will be the focus of further consultation in late 2017 and into 2018.