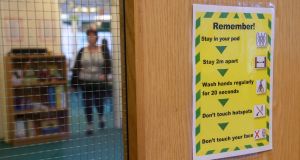 Vulnerable children are losing out on vital supports due to Covid-19 restrictions since schools reopened in September, according to a new survey. Photograph: Oli Scarff/AFP

Vulnerable children are losing out on vital supports due to Covid-19 restrictions since schools reopened in September, according to a new survey.

The poll of also 400 parents and carers found that many young people attending special classes are being excluded from mainstream education as a result of social distancing requirements.

A large majority (79 per cent) stated that children would need in-school support to continue their learning in the event of any future school closures.

The survey was conducted over a two-week period in October among 382 community members from campaign groups including Inclusion Ireland, Down Syndrome Ireland and AsIAm.

A key finding in the survey is the severe impact of school closures had on young people with additional needs.

Most families said they hoped they never again lose the support and structure of school as they did earlier this year.

“ It is vital that the support young people need to make this year a success, including access to additional teaching time and SNA support, are readily available,” Mr Harris said.

He said his organisation was particularly concerned that a large number of families reporting having insufficient SNA access or have reported seeing a reduction or loss in SNA support.

While the Department of Education has provided the same support to schools as last year, it was not taking into account the profile of individual students in schools or the impact of the pandemic, he said.

“These learnings must be acknowledged before the Department moves any further towards a frontloading model of SNA support which it proposes to do this coming September,” he said.

Despite the challenges, he said many young people are greatly benefiting from the return to school and parents want to make sure this continues in the context of any post-Christmas restrictions.

Fidelma Brady, Down Syndrome Ireland’s head of education, said findings bring into the public domain the challenges faced by parents of children with special educational needs as they returned to school in September.

She said reductions in the levels of SNA support and special education teaching support, together with the lack of access to therapies and the use of reduced timetables for our children, are issues that must be addressed immediately.

“We need to ensure that, going forward, all children have access to appropriate and beneficial education in schools, and experience inclusion at its best at every stage of their education journey,” she aid.

Enda Egan, Inclusion Ireland’s chief executive, said there was broad satisfaction among parents with the return to education.

However, he said a number of critical issues are highlighted that would greatly enhance participation in learning for children with an intellectual disability.

The lack of access to sensory breaks and sensory supports, such as ear defenders or fidget toys, due to Covid-19 compliance stands out, he said.

“These are essential for many children to achieve their full potential in education and must be looked at,” he said.

“Provision must be made to ensure these children continue their inclusion journey,” he said.

The report highlights a number of recommendations which are key to the success of children integrating fully back into the education system, including greater levels of integration from special classes to mainstream classes.