With the Government borrowing billions to cover the pandemic, workers may be worried they will be asked to pay for it 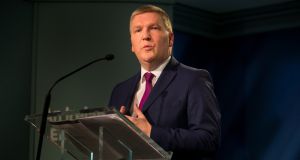 Michael McGrath: he said it was “inevitable” there would be tax increases at some point in the current Government’s lifetime

While we may have escaped any personal tax rises in October’s budget, it is reasonable to wonder if the Government is merely holding fire for another day. After all, while there is now light at the end of the Covid-19 tunnel in the form of several vaccine candidates, the costs of the pandemic have been onerous.

Unemployment reached as high as 40 per cent at one point this year, the national debt has stormed ahead and is expected to reach €240 billion by the end of next year, while the budget deficit is forecast to be about €21 billion for 2020.

Asking the general populace to contribute to the cost must be a reasonable expectation.

On Monday the Irish Fiscal Advisory Council (Ifac) warned that spending increases in Budget 2021 were imprudent and leave the public finances more vulnerable to future adverse shocks unless the Government can come up with “sustainable revenue streams”. That is generally shorthand for tax increases or new taxes.

Similarly, last month Minister for Public Expenditure and Reform Michael McGrath said it was “inevitable” that there would be tax increases at some point in the current Government’s lifetime.

It is certainly on the minds of other countries stung by the pandemic. Across the Irish Sea, while UK prime minister Boris Johnson is saying no to income tax increases, his chancellor of the exchequer, Rishi Sunak, has not ruled out such a move, warning that current levels of spending were “unsustainable”. Potential increases to income, wealth and inheritance taxes all seen to be in the mix.

And it could be argued that a dip in workers’ take-home pay is something that could be stomached. Income tax receipts this year indicate that a sizeable proportion of the population has not yet felt the grip of Covid-19 on their finances.

So far at least income tax receipts have proved remarkably resilient to the havoc wreaked on the economy by coronavirus. Despite record levels of unemployment – temporary or not – income tax receipts in November were down by just 3 per cent, or €576 million, compared with the same period in 2019.

Overall estimates suggest that by year-end income tax receipts will only be “marginally below” 2019 levels.

And while the differential is worsening – in August, for example, income tax receipts were down by just 1.4 per cent – it’s still far lower than one might have expected, and less than the Department of Finance itself had expected in its revised estimates.

The reasons, as noted in the Ifac report, are twofold; firstly, income tax receipts performed strongly in the first few months of the year before the pandemic hit.

And secondly, the pandemic has had a disproportionate impact on low-income workers in retail and hospitality, many of whom would not have been significant payers of income tax.

Increasing taxes, then, could be a way of sharing the burden between those whose livelihoods have been decimated and those who are buying new windows and planning holidays.

The Government will also be keen to shore up its income tax receipts which are now of increased importance to the State’s overall coffers.

Back in 2007, receipts from income tax were of the order of about € 13.6 billion, accounting for 28.7 per cent of the total tax raised that year. Fast forward to 2019, however, and almost €2 out of every €5 in tax collected came from income tax. So if this is falling it is a very real concern.

To some extent the Government’s hands are tied as it did commit to not raising either income tax or the universal social charge (USC) under its programme for government. However, the small matter of a pandemic would give it grounds to change this approach.

For one the pandemic is the problem this time around, not the public finances. The hope is that once restrictions can be eased the economy will bounce back.

KBC economist Austin Hughes has a good sense of this having overseen the bank’s consumer confidence surveys for many years. He says that in the US when a consumer sees a downturn they start to think about the next upturn. But in Ireland we’re already thinking about how it can get worse with the Government raising taxes.

This might be compounded by how much people have already started to save. Figures from the Central Bank on Monday showed that Irish households had a record €123 billion on deposit in October. Shift the rhetoric to the topic of tax hikes and the Government could reasonably expect demand in the economy to fall even further into the new year as households look to hold on to what they have for that rainy day.

Economist John Maynard Keynes called it the “paradox of thrift”. During times of crisis or uncertainty, households will save more, which leads to a drop in demand, which in turn hurts economic growth, which then makes tax necessary to protect the economy.

For now the Government is likely to put personal tax increases on the long finger, hoping that if and when a vaccine eases Covid-19 restrictions, household spending will kick into gear, boosting all those hospitality and retail businesses that have been hit so hard. A recovering economy will mean recovering tax receipts, without the need to impose austerity.

But, as with everything right now, the only certainty is uncertainty.