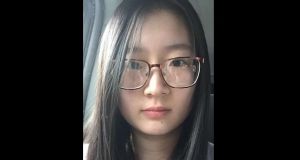 Victoria Xu (17), who attended The Institute of Education in Dublin, had six of her Leaving Cert marks downgraded through the calculated grades process.

A Leaving Cert student who had six of her marks downgraded through the calculated grades process has said she feels “lost and hopeless”.

A breakdown of calculated grades figures, published earlier this week, showed that almost 100 Leaving Cert students had six or more of their teachers’ estimated grades lowered under the Department of Education’s system.

Victoria Xu, who attended The Institute of Education in Dublin, was one of those students.

The 17-year-old intended to study engineering at Trinity College Dublin, however, following the standardisation process, she lost 66 points and did not receive any Level 8 offers from the Central Applications Office.

“I’m sure the other students are feeling the same as I am: really lost and hopeless. I don’t know what to do at the moment,” she said.

Ms Xu has expressed concern over how the standardisation process worked, saying she doesn’t understand how “they choose who to upgrade and who to downgrade and who to keep the same”.

The Dublin student has appealed the six grades but does not believe it will change her situation as the appeals process is confined to checking that all data was transferred and processed correctly by schools and the department.

She is now preparing to sit four Leaving Cert exams in November as she feels she has “no other option”. The exams were postponed during the summer due to the Covid-19 pandemic and the predicted grades system was introduced as a means to provide students with a basis to enter the higher education system this year.

Ms Xu feels she faces a disadvantage in sitting the exams late as she is recommencing her studies after six months away from school. She and others taking the exams in November will be in competition with students who will complete their Leaving Cert next summer for college places.

“There’s a huge gap between when we had school to when the exams were cancelled to now, and it’s very stressful to prepare for the exams in such a short amount of time,” she said. “I’m not afraid to sit the exams in November, but it’s about having to waste a year and start college in 2021.”

Ms Xu believes the appeals process should examine the grades of individual students rather than errors in the system and has said “the Government should change the process as soon as possible for the students who were treated unfairly”.

A record 12,000-plus Leaving Cert students have sought rechecks of their calculated grades, while a number have initiated High Court proceedings over the process.

The deadline for applications to sit the 2020 Leaving Cert in November is 5pm on Friday.