Norma Foley: Maximum number of college places will be made available but some may have to defer 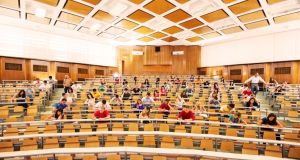 The Irish Universities Association said third level institutes will work with the Department of Higher Education to accommodate students who are entitled to college places. Photograph: iStock

Minister for Education Norma Foley has said that the maximum number of third level places possible will be made available to students who have been impacted by the errors in the calculated grades system.

Up to 1,000 extra college places may be needed for students due to errors in calculated grades issued to thousands of Leaving Cert candidates.

Ms Foley apologised on Wednesday for coding errors which resulted in at least 6,500 students receiving a lower grade than they ought to have received.

Speaking on RTÉ radio’s Morning Ireland, Ms Foley acknowledged that some students may have to defer for a year because it just was not possible to find a place.

Ms Foley defended the timeline of the details of the error being revealed. She said she was first informed on September 23rd that there was an error in the system. The exact numbers were not known and her main concern was the students involved.

The Minister said she wanted clarity on what the impact would be before she announced what had happened. She requested her department to get expert international oversight to the process. “When the checks are complete all the information will be available.”

The office of the Taoiseach was also informed as were the coalition party leaders and the Minister for Higher Education, she said.

On the same programme, the Irish Universities Association said third level institutes will work with the Department of Higher Education to accommodate students who are entitled to college places.

The association’s director general Jim Miley said the challenge will be for universities and colleges to match offers with places.

“The process has to run, the department has to supply the file of corrected results they then need to be run through the system to see how many of those are eligible for offers. I’ve heard estimates of the number that may emerge on that, but in reality at this point nobody knows,” he said.

“The message we’d like to give students is that universities and colleges will work with the Department of Higher Education to do everything possible to find those places.”

Mr Miley added that based on the Minister’s comments it would be the end of the week at the earliest before the corrected results are sent through. “Then it takes a number of days to process those for the CAO and universities and colleges to make the offers available, so it certainly will be well into next week and could be the end of next week.”

Mr Miley said the hope was that as many as students as possible would be slotted into places, the department and the HEA had funded extra places already this year.

“We’re operating on the basis that they’ll also fund these further additional places.”

There were certain courses that will face challenges because of the need for placements – mostly in the health sciences. The HEA was in discussions with the Department of Health about that, he said.