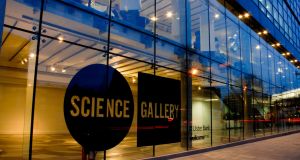 TCD Science Gallery. Over the past decade, Irish universities including TCD have borrowed at least €675 million from the European Investment Bank and other sources.

Irish universities are at risk of losing their capacity to borrow hundreds of millions of euro needed to fund their expansion to cope with rising student numbers.

Eurostat, the European Union’s statistics agency, has asked the Central Statistics Office (CSO) to determine whether universities are on or off the exchequer’s balance sheet.

At present, Irish universities are regarded as off balance sheet. This has been crucial in allowing them to borrow hundreds of millions of euro to fund new buildings at a time when State investment has been falling and student numbers are rising.

Over the past decade, Irish universities have borrowed at least €675 million from the European Investment Bank (EIB) and other sources.

This has been used to transform research and student facilities at Trinity, UCD, DCU, University College Cork, Maynooth University and the University of Limerick.

However, university sources are worried that they could be classified by Eurostat as being on the State’s balance sheet, in the same way that Irish Water was in 2015.

This would represent a major blow to the planned expansion of the higher-education sector as universities’ substantial borrowings would be classified as being part of the national accounts.

University sources say Government controls over staffing numbers and salary caps mean universities could be regarded as under State control rather than market entities.

Experts acknowledge that the State has very limited “fiscal space” at present. University borrowings – if classified on the national accounts – would eat further into these limited resources.

The CSO is finalising a report which will recommend to Eurostat how universities are classified. It will be up to Eurostat to make a final decision.

The CSO declined to comment on its report, which is due to be submitted to Eurostat shortly.

“The classification of universities is currently being revised by the CSO,” a spokeswoman said. “This work is still in progress and until such time as a ruling has been made the CSO is not in a position to give more information.”

Documents seen by The Irish Times show the CSO’s report will advise on whether universities should be classified on national accounts using a “market test” and “control test”.

The market test determines whether an institution is a public or private entity, while the control test is based on the level of control over an institute by central government.

Sources say it is likely universities will pass the market test, on the basis that most are raising the bulk of their revenue privately through student charges and research activity.

However, there is uncertainty around the outcome of the control test, given government restrictions over salaries and the number of staff employed in these institutions.

Even if the CSO recommends that universities remain off the balance sheet, there is still no guarantee that Eurostat – which is independent of any government – will agree.

In the case of Irish Water, it was widely reported that the CSO made a strong recommendation that it should quality as an off-balance-sheet market corporation. Eurostat disagreed, however.

This ruling was a major blow to the Government, given that a key goal of establising the entity was that borrowing needed to upgrade water infrastrucutre would not count as government spending.

For the universities, much more money will be needed over the coming years with student numbers in higher education forecast to rise by more than 25 per cent before the end of the next decade.

Just last month NUI Galway announced it had secured €60 million from the EIB to finance construction of new student residences and building for its college of medicine, nursing and health sciences.

The EIB is expected to provide €110 million to support consolidation of the Dublin Institute of Technology campus at Grangegorman in the coming months.