Survivors of clerical sex abuse want apology from the pope

While Darren McGavin has a positive outlook on the Church, he says a personal apology from the pope is necessary 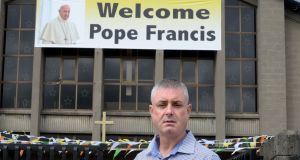 Darren McGavin at the Church of Our Lady of the Assumption in Ballyfermot. Photograph: Cyril Byrne / THE IRISH TIMES

Loreto Martin was the victim of a physical assault one day in 1998. It triggered flashbacks. As she lay on the floor, she remembers, she saw the face of the paedophile former priest Brendan Smyth, not the person attacking her.

Years later, while studying the effects of deep trauma, she began to understand “disassociation” – the detachment from emotional and physical experiences. She had blocked so much out.

“The world that I knew turned upside down,” she said of that day when years of childhood abuse at the hands of Smyth came flooding back.

“I was able to keep my job and function in my job but I wasn’t able to do anything else. My husband was mother and father to the kids.”

Smyth, who died in prison in 1997, had raped Ms Martin for years since she was 13 years old. He told her he was saving her from the fires of hell. She never breathed a word.

Ms Martin recalled how she would get into a bath with scalding water and pray she might bleed to death. “And then the water would be cold and I would still be alive,” she said, thinking back. “He really had me. He just had me.”

Like many survivors of clerical abuse, Ms Martin must now process the idea that enormous crowds of people will flock to welcome the head of the Catholic Church this week. Like many survivors, she admires the pontiff but must reconcile his visit with an institution that has, in the eyes of many, done little to comprehensively address its dark history.

“I think, yes, coming here is an attempt to deal with it, but his advisers said that he wasn’t coming to see survivors and that had everyone up in arms,” she said.

“He needs to say to everybody and all parishes: give all your files over”, to aid a full investigation of clerical crimes and their cover-up, something she has called for since 2010 when she first went public with her story.

“[An investigation] needs to be funded by the church and operated by the State and he needs to call for that,” she said.

“I would love to meet him because if I did I would say that’s what I need and that’s what the people who have died by suicide need.”

A particular source of pain for Ms Martin is the cover-up. In 2010 she found out Cardinal Seán Brady had been aware of Smyth’s abuse of children but did not stop it. It catapulted her back into a deep depression.

“To me that was the worst part of everything,” she said.

“Because all along I thought nobody knew [about the abuse] and to think that somebody did know and didn’t do anything to protect me. And this was the head of the church in Ireland and he was supposed to be protecting children.”

As a child, Darren McGavin (44) was abused by former priest Tony Walsh in Ballyfermot, Dublin. Walsh was jailed for 16 years in 2010 and was described in the Murphy report as “the most notorious child sexual abuser”, likely to have preyed upon hundreds of children.

Mr McGavin has spent years working with others who have suffered at the hands of clerical offenders and knows nine individuals who have taken their lives.

While he has a positive outlook on the church and its efforts to address the issue – he particularly praises Archbishop Diarmuid Martin – he said a personal apology from the pope was necessary.

“I don’t expect bells and whistles but I do expect a sincere apology to myself,” he said.

And while he has no issue with Pope Francis being welcomed here, he added: “I don’t want people like myself and other people like me to be forgotten about.”

Mr McGavin said he was not anti-priest nor anti-church but “anti-predator and anti-cover-up”.

Brian Granger (57) said he was groomed by a priest he had confided in as a teenager, following years of abuse by other men when he was a child.

Although the sexual encounters did not occur until he was 18, he believes his vulnerability was manipulated by the priest over a number of years. The priest has since died but Mr Grainger is still dealing with the effects of his past.

“I felt a hold. Looking back I felt there was a hold on me,” he said.

He has “walked away” from the church but remains good friends with some members of the clergy.

As for the papal visit, he said he began to have pronounced feelings about it only following the debate around whether or not the pope would address the abuse legacy head-on.

“I felt ambivalent initially . . . but in light of the fact that they are now not addressing the whole issue of abuse, that would bother me,” he said.