Use of facial-imaging software for anti-fraud measures is legal, Minister says 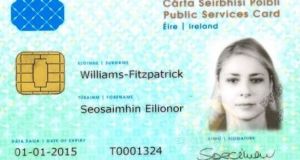 The use of facial imaging software by the Department of Employment Affairs and Social Protection to detect potential identity fraud is “compliant with the law”, Regina Doherty has said.

The Minister was responding to parliamentary questions following controversy in recent months about the department’s collection of people’s personal data as part of the public services card project.

More than three million cards have been issued to people, mainly following a face-to-face registration process where their picture is taken and used both for display on the card and as part of the image-matching database.

Some have been issued to people who have given their consent for the image from their passport or driving licence to be used on it.

The department has maintained the position that it does not process “biometric” data, which is the unique information that serves to identify a person, such as their facial image or fingerprints.

It emerged last week the department’s secretary general instructed the removal of a reference on its website to the department collecting “biometric” data relating to individuals, following questions from The Irish Times.

Social Democrats TD Catherine Murphy submitted parliamentary questions to the Minister after the changes were made to the new privacy statement on the department’s website, removing a reference that said it processed “biometric” data.

Ms Murphy asked the Minister if her department processed biometric data in the context of the definition in the EU General Data Protection Regulation.

Ms Doherty said the collection and printing of “a simple jpeg image” on the public services card did not constitute “the collection or processing of special category data”, which includes biometric data.

“I wish to be clear, however, that these photographs are, in addition to being printed on the PSC (public services card), processed, in a separate process, via facial imaging software to create an arithmetic template which is used to detect potential identity fraud,” Ms Doherty said.

“This arithmetic template is not stored on the public services card, does not form part of the public service identity set, and is not shared with any other third party. They are stored only in the facial image matching software’s database held in the department’s own secure data centres,” she said.

“The department is satisfied that its use of facial imaging software is compliant with the law and is covered by the current legislative framework including the GDPR, the Social Welfare Consolidation Act, and the Data Protection Act 2018.”

The Minister said the EU regulation “clarifies that the processing of certain personal data, such as photographs, should not systematically be considered as biometric data unless such personal data is processed through a specific technical means allowing the unique identification or authentication of a natural person”.

Answering a separate question from Ms Murphy, the Minister confirmed that after her department had been contacted by a journalist, officials in her department “took the view that the privacy statement should be amended to remove anything that may create confusion, especially in relation to the SAFE (registration) process and the collection and use of photographs for the public service cards”.

Privacy campaigners have raised concerns about the manner in which the card project is being undertaken, and they claim it amounts to the introduction of a national identity card by stealth.

The department says the card is not a national identity card and is issued for the purposes of identifying people obtaining a service from the State.

The processing of “special categories” of data - including biometric data, information about a person’s racial or ethnic origin, political opinions, religious or philosophical beliefs, trade union membership, data about a person’s sex life or sexual orientation - is prohibited, other than where specific legal requirements are met.