Leaving Cert student told he is not eligible for predicted grade

‘It has really taken a drag on my self-confidence . . . it will mean I can’t go to college this year’ 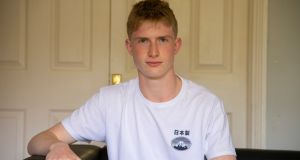 Finn Robertson (17), from Dungarvan, Co Waterford, has been told he will not receive an estimated grade for higher-level politics as he was self-taught in the subject and did not have a tutor. Photograph: Patrick Browne

A Co Waterford Leaving Cert student has been told he is not eligible for predicted grades for one of the subjects he studied because he was self-taught and did not have a tutor.

Finn Robertson (17), from Dungarvan, studied five subjects in school and taught himself higher-level business and higher-level politics because the two subjects were not available at his school.

He will receive a predicted grade for business because he attended grinds in January and February, but he has been told he will not receive an estimated grade for politics as he had not begun private tuition for the subject.

In an email to his mother Alex Robertson, his school, Dungarvan CBS, said it “has to be satisfied that there is sufficient evidence available to them to stand over the estimated mark being provided”.

“Unfortunately, the fact that Finn has sat the pre exam is not sufficient evidence to base an estimated mark in the subject Politics & Society. The student’s learning has to have been guided by and overseen by a suitable tutor,” the email said.

Ms Robertson described the decision as unfair because her son sat the mock exam earlier in the year, which she says was marked by an external examiner.

The student said being ineligible for a predicted grade in politics means he will not have enough points for college this year as he is taking ordinary-level maths. He had hoped to study politics and journalism at the University of Limerick.

“It has really taken a drag on my self-confidence. Sitting the exams at a later date is something I will have to consider but it really isn’t something I want because it will mean I can’t go to college this year,” he said.

Dungarvan CBS said all guidelines had been adhered to when administering calculated grades. A departmental spokesman said: “For the system to be operated with integrity, and fairness to all students, there must be credible, satisfactory evidence from an appropriate source, on which an estimated percentage mark can be based.

“However, it is the case that, despite every effort being made by schools and the calculated grades executive office, it will not be possible to provide a calculated grade for every student in every subject. Such students will have an opportunity to sit the Leaving Certificate examinations when it is safe to do so.”

The student says he intends to protest outside the Dáil on Monday, July 13th, in a bid to get the attention of policy-makers if the situation is not resolved.