Transition year: Why other countries are copying the Irish ‘doss' year 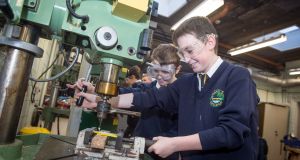 Transition year is more popular than ever. By now it is available in 92 per cent of schools, and a record 72 per cent of third-year students went on to do it this year.

It’s a time for students to step away from the books, learn more about themselves and mature socially and emotionally.

Other countries seem to be taking note. In 2017 officials in Singapore – which tops the Programme for International Student Assessment rankings – quizzed then minister for education Richard Bruton about the model.

In a country where concerns have been raised about the intense academic pressure being placed on pre-school children, they wondered if it could help reduce stress and anxiety by pausing the academic treadmill.

And in 2015, a new secondary school programme in South Korea was influenced by transition year.

But has transition year really succeeded in Ireland or, with the new junior cycle and mooted senior cycle reforms stealing much of its focus on personal development and self-directed learning, is it possible that it has run its course?

And with so much focus on the exam years, is transition year in danger of slipping down the agenda?

Dr Gerry Jeffers is a retired lecturer in education at Maynooth University, author of Transition Year in Action, and the former co-ordinator of the Department of Education’s transition year curriculum support service.

“Transition year is an idealistic project that has taken root in the system,” he says. “It recognises that young people aged 15 and 16 need time, space and opportunities to move from a highly structured environment to one where they take greater responsibility for their own learning and decision-making. Part of the appeal is that it is counter-cultural.”

Transition year’s influence in the revised junior cycle, which emphasises personal growth and the development of critical skills, has been evident. Should it be stripped for parts and redistributed to the other years in school?

“When it was introduced in 1974, the guidelines stated that the transition year philosophy should permeate the entire school. But it does have an important value as a separate, stand-alone programme, and I would hate to see that lost.

“If anything, some of what we have learned from transition year – particularly work experience – would be a welcome addition to fifth year. There is a sense that transition year students, by and large, find transition year rewarding but then are plunged into the senior cycle with its heavy focus on homework and study.”

One of the strengths of transition year is that each school creates and tailors its programme based on what works best for their students.

The downside of this is that the quality of programmes can vary dramatically between schools.

“Transition year had been disappointing so far,” says one student, who asked to remain anonymous. “Its overhyped and, although we’re supposed to be ‘transitioning’ from teenagers to young adults, we’re still talked to and treated like children.

“The modules are okay, but the tasters are really short. Many of the trips we’ve gone on have been boring and, when we’re asked for feedback on them, what we say isn’t really taken on board. It hasn’t made for a fun year.”

Jeffers says that transition year may need more focus from the department and suggests that, ideally, a report would be issued by the inspectorate about transition year’s strengths and weaknesses every two, with suggestions for improvements.

“Teachers are committed to it, and have great freedom to be inventive and creative in what they do, but often trapped by the exam focus and the effect of the publication of league tables on their school. So, for some, transition year class is their favourite of the week, but for others it’s bottom of the agenda.”

There’s also a concern that transition year can be elitist, with wealthier schools and parents being able to fork out more for school trips. The Society of St Vincent de Paul has said this can place an extra burden on families.

“We have inequality in society and schooling, so it isn’t surprising that we find it in transition year programmes,” says Jeffers.

“That said, I’m impressed by how some Deis [disadvantaged] schools are finding local activities that don’t cost an arm or a leg. Sometimes, schools start collecting transition year contributions in third year to spread the cost.”

Crana College in Donegal introduced transition year in 2013 and was recently commended for its programme in a whole school inspection.

“Around one-third of the students take part in transition year,” says programme co-ordinator Michelle Bradley. “We work hard to keep the programme fresh and relevant by listening to the student evaluations. One of the big challenges for us is that so many of the transition year events happen in Dublin or Galway, and attending them can be costly. I’d like to see more organised on a regional basis.”

The school’s programme allows some flexibility for students to choose modules of interest to them, including, for instance, art or creative fabrication (a cross between engineering and technology).

Outdoor activities, voluntary work, drama, a mini-company and student reflections are among the most prominent modules. A musical takes place every other year.

In a county with a higher-than-average number of road deaths, road safety is a key course. This year the school introduced the new GAA Leaders module (see panel). Transition year students also contribute a weekly column to the Inish Times, the local newspaper.

Niamh Bradley, a sixth-year student at Crana, has fond memories of her transition year experience.

“It really helped with my confidence and maturity, and we had a big input into what we wanted to do. I went in thinking I wanted to be a primary teacher but came out thinking I’d like engineering. It pushed me out of my comfort zone and I loved every second.”

There’s no shortage of well-established and newer initiatives for transition year teachers to consider. These include:

– Young Social Innovators: Possibly transition year’s flagship programme. More than 120,000 students, primarily from transition year, have worked on projects to make their community, country and world a better place to live in. The emphasis is firmly on empowering young people to bring about social change (youngsocialinnovators.ie)

– GAA Future Leaders: A relatively new initiative aimed at developing maturity, initiative, responsibility and leadership in students, where they are challenged to organise and run a blitz or games centre for younger students (learning.gaa.ie/transitionyearprogramme)

– Saffron Travel: An innovative, Louth-based company with expertise in organising and supervising affordable yet high-quality school tours. Their European tours are highly relevant to aspects of the school and transition year curriculums, with perhaps the most interesting being a visit to key first and second World War sites in France and Belgium (saffrontravel.org)

– Public Access to Law: Helping to demystify law and running an annual national mock trials competition, this can also be a good introduction to legal reporting, acting and photography (palddp.ie)