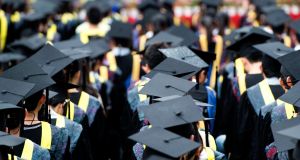 Ireland’s main universities have promised to do more to promote competition between suppliers of gown hire and other services to graduating students.

The Irish Times has established that a number of companies supplying gown hire and photography services to graduating third-level students are all controlled by the same London owner and all operate from the same Dublin address.

The Competition and Consumer Protection Commission said in a statement on Tuesday it had secured a commitment from Trinity College, Dublin; Dublin City University; University of Limerickand the National University of Ireland (NUI) that tender procedures will take place more regularly to encourage greater competition in gown hire supply.

Universities run public tender competitions to choose a gown supplier, it said, but a small number of companies are frequently appointed by colleges for repeat, long-running contracts.

“This lack of competition in the supply of academic gowns has resulted in a situation where a single firm acquired a dominant position in the market.

“Dominance by a single firm is not illegal under competition law, however consumers lose out when a dominant firm does not face competition from rivals.”

Trinity College, on its website, advises graduates they can get their robes from Armstrong and Oxford Ltd.

NUI, whose members include University College Dublin (UCD), NUI Galway and Maynooth, has appointed Phelan Conan Ltd to provide robes to its member institutions. However, students at University College Cork (UCC), which is also an NUI member, are directed towards a different company.

Armstrong and Oxford, Phelan Conan and Lafayette use an address at Graduation House, Fashion City, Ballymount, Dublin 24, as does a firm called Irish Legal and Academic Ltd, which also supplies gown and photography services and is also linked to the London company.

Founded in 1689, Ede & Ravenscroft is thought to be the oldest tailoring firm in the world.

Requests for comment from Armstrong and Oxford and Phelan Conan Ltd on Tuesday met with no response.