‘That’s so gay’: How can we tackle homophobia in our schools? 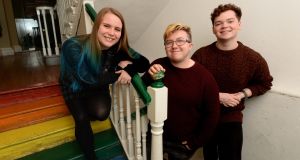 The election of Barack Obama heralded the end of racism in America, in much the same way as the marriage referendum in Ireland eradicated homophobia and transphobia overnight. Right?

Of course not. Progress isn’t always linear. In a recent survey of 565 young lesbian, gay, bisexual, transgender and intersex people (LGBTI), some 70 per cent said schools in Ireland are still not fully inclusive of these students.

A further 39 per cent highlighted a serious lack of inclusive sex education and 25 per cent said bullying and homophobia continue to be problems. The survey was carried out for Gay Community News.

So, what is the reality for minority students in classrooms today? What are the biggest challenges? And where are there signs of progress?

To help answer these questions, we spoke to young people, campaigners and teachers about resources and support for LGBTI youth, bullying, sex and relationship education and an ideal future. They include:

Ayrton Kelly (19) is from Letterkenny in Co Donegal. He is a second-year student of international commerce at UCD, and he is gay.

Katie McCabe (19) is studying youth and community work at Maynooth University, and moved to Dublin from Co Clare at the age of 13, and she is a lesbian.

Kevin Barry is principal of Deerpark CBS, an all-boys school in Cork which has run StandUp week for the past two years. He says the Edmund Rice Schools Trust (ERST) , the patron of CBS Deerpark, values and promotes not just tolerance but active inclusion, and that this extends to students and staff of all ethnicities, religions and sexual orientations.

Bullying: ‘The slurs get posted onto social media’

So, why do young gay, lesbian or transgender students need such extensive support?

Jay Pope began to realise he was trans around the age of 14, and the internet helped him put his feelings and experiences into words. He says he was lucky: despite worries about how he would be perceived, his school, family and friends were very accepting. But it hasn’t been all plain sailing.

“There was one terrifying incident where I was waiting in a public bathroom for the cubicle and was challenged by someone much bigger and stronger than me about what I was doing there.

“And I know of many incidents in which transphobic slurs are thrown around, and where there is bullying and slurs about named individuals posted to Facebook and other social media sites.”

We don’t use racist terms, so why do we use homophobic or transphobic language

Recently, mixed martial arts fighter Conor McGregor said he was sorry for his use of the word “faggot”, accusing those who were offended of trying to “throw [him] under the bus”.

Kelly and McCabe say they have heard “faggot” and “gay” thrown around as slurs all their lives.

“One of my friends was talking about a band she didn’t like and said: ‘that’s so gay’,” says McCabe.

“She apologised immediately and said she didn’t mean it like that. I accept that, but we need to move away from using those words. We don’t use racist terms, so why do we use homophobic or transphobic language?”

Griffith says 75 per cent of LGBTI young people have been verbally abused, but it’s enough to be simply perceived as LGBTI to face abuse.

“One in three has been threatened with physical violence. One in five has been hit or attacked for being LGBTI. The fear is real; many have witnessed or experienced it in their homes, communities and school.”

Kevin Barry says ERST schools want to be inclusive. “For us that means being free of bullying, and one of the most prevalent forms of bullying is against LGBTI students.”

Sex education: ‘12 is the most common age to come out’

The quality of sex and relationship education in schools generally leaves much to be desired, says Griffith.

“Research shows that 12 is the most common age to come out and yet the majority of people still don’t believe a 12-year-old can understand sexual orientation.

“Until recently, sexual healthcare was focused on reducing STIs and the number of teen pregnancies, but we are now beginning to talk about consent, sexual health and positive views of sexuality. Still, teachers are not resourced properly and young people are leaving school without the information they need.”

During StandUp week, CBS Deerpark plans to have guest speakers from the LGBT community and will also include information about rights across key subjects.

Pope says he is very lucky to have a teacher who includes LGBTI people in SPHE (social, personal and health education) class, talks about consent for all students and makes an active effort to listen to and hear LGBTI students. McCabe barely had sex and relationships education at all, let alone one that was inclusive of LGBTI students, and both she and Griffith are concerned that nothing is changing despite a HIV epidemic among young men in Ireland.

Kelly says the extent of LGBTI inclusion was a few posters from BelongTo, but that “there was no real sex ed for anyone and the topic of homosexuality wasn’t really raised at all”.

Support: ‘I told the chaplain in my school and he was hugely supportive’

Are there adequate resources and support services for young LGBTI people? Our panel say it depends on where they live. Aryton Kelly began to come out as gay when, in fifth year, he told his sister.

“Soon after, I told the chaplain in my school, and he was hugely supportive,” he says. “He suggested I speak with the Donegal Youth Service, and they were brilliant too. That said, I was lucky to be from Letterkenny; in other parts of the county and country, there isn’t the same access to support.”

Katie McCabe agrees, pointing out she knows of young people who, unbeknownst to their parents, travel from the midlands or beyond to Dublin so they can access support groups.

Countrywide services still leave a lot to be desired, says Moninne Griffith. “Through the National Office for Suicide Prevention, we support LGBTI youth groups, usually with Youth Work Ireland or Foróige, but they are not in every county and, if you live on the other side of the county, the lack of transport in rural Ireland makes it hard to access.

“We have the LGBTI helpline to support people on the phone or via text and this is a lifeline, but there needs to be more done for youth services across the board.”

The future: ‘Over-16s should be allowed to consent to sexual, medical and mental healthcare’

The Department of Children is currently developing an LGBTI youth strategy, which will be published in December. It is based on consultations with more than 4,000 young people and the group is chaired by Irish Times journalist Una Mullally. Meanwhile, the Department of Social Protection is reviewing the Gender Recognition Act.

“We have a chance now to get this right,” says Griffith. “I would love to see LGBTI awareness training become ordinary and everyday for youth workers, so they can feel confident and capable of supporting young people. And I’d like to see the Equal Status Act amended to include gender equality and sex characteristics and for people aged 16 and over allowed to consent to sexual, medical and mental healthcare. There is a lot we can achieve in the next five years.”

of LGBTI young respondents say they have been verbally abused on the basis of their sexual orientation;

say there is a serious lack of inclusive sex education at school;

feel bullying and homophobia continue to be problems

say schools in Ireland are still not fully inclusive of them.