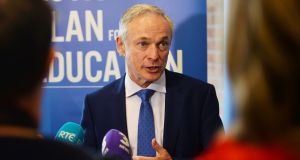 Minister for Education Richard Bruton: “Homemakers make a huge contribution to society. It is important the Government supports people who have worked in the home to reskill and return to work.” Photograph: Alan Betson

Hundreds of homemakers have signed up for free higher education courses as part of an initiative aimed at filling skills shortages.

The Springboard+ scheme provides access to courses at certificate, degree and masters level in areas such as advanced manufacturing, business and entrepreneurship and ICT.

The programme began during the economic downturn as a way of helping individuals who had lost their jobs to retrain for new opportunities.

This year it was expanded to homemakers for the first time, typically mothers who may have raised their children and now want to return to the workforce.

In all, some 4,500 people have signed up for Springboard courses this year, including more than 300 homemakers.

Over half of these homemakers enrolled in courses in advanced manufacturing and ICT.

Those in employment have also been given the opportunity to upskill in certain courses such as advanced manufacturing and biopharma/medtech sectors.

Some courses are still open for applications (springboardcourses.ie), with 90 per cent of places filled.

Minister for Education Richard Bruton welcomed the strong uptake and said some two-thirds of the 35,000 people who have taken part in these courses since 2011 have found employment in their areas of study.

“Homemakers make a huge contribution to society. It is important that the Government supports people who have worked in the home to reskill and return to work if they wish to,” he said.

He said as unemployment continues to fall, he will consider ways in which Springboard+ can be expanded to “support the ambition to make Ireland a leader in anticipating and responding to the rapidly changing skills needs across all sectors”.

The free places are funded through a levy on employers – the National Training Fund – and funding from the European Union.

Almost half of Springboard enrolments are unemployed people with a previous history of employment.

Latest data shows that some 61 per cent of graduates are in employment between three to six months after graduation.

This figure climbs to 73 per cent for ICT conversion graduates. This is a significant increase on 2011 figures, when just 37 per cent of graduates were employed after six months of finishing their course.

The programme is managed by the Higher Education Authority on behalf of the Department of Education.

Since 2015, Springboard courses and ICT conversion courses have been run as a joint initiative under the banner brand Springboard+.

They range from certificate courses (level six) to masters (level nine) and are delivered by public and private higher education providers around the country.

All courses approved for funding under Springboard+ are selected by an independent panel with experts from industry and education following a competitive tendering process.

In particular, courses with a proven track record in getting people back into employment are recommended for funding.