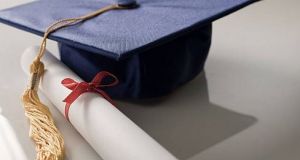 Policy-makers in Ireland are examining options on how to fund higher education. Photograph: Getty Images

Third-level students in Ireland pay the second highest fees in Europe, according to a new report by the European Commission. While the UK has the highest fees – equivalent to about €10,000 – it is followed by Ireland with fees of €3,000.

A crucial difference, however, is that more than 40 per cent of students in Ireland do not have to pay fees as they are entitled to means-tested grants. All students in the UK – with the exception of Scotland – are required to pay fees.

Overall, 11 jurisdictions charge no fees for most first-time undergraduates such as Denmark, Finland and Germany. Another 14 charges students up to €1,000 a year, ranging from France (€184) to Austria (€725).

Another group of countries charge between €1,000 and €2,000 per year, including Spain, Italy, Poland and the Netherlands.

The study is based on an examination of 42 education systems in various jurisdictions across Europe. It is based on figures for the 2017/18 academic year.

Overall, it finds that European countries differ significantly in the level of public expenditure allocated to higher education. They also follow different approaches to requiring contributions from students, as well as to the financial support provided to students during their studies.

The report also states that some countries continue to pay child or family allowances for young people in full-time education up to the age of 25. Many jurisdictions also offer tax relief to help offset the cost of college.

The report comes at a time when policy-makers in Ireland are examining options on how to fund higher education. Last year an expert group on the future of higher education funding – the Cassells report – studied approaches used in countries such as Norway, the Netherlands, Australia, England and the United States, and identified three main funding options for the Irish system.

This is much less than student loan schemes in the UK or US, where the size of the debt is typically a multiple of this figure.

The three options are being examined by the Oireachtas Education Committee. Most Opposition parties are opposed to a loans scheme, while Fianna Fáil has signalled that it is not convinced of its merits.

Taoiseach Leo Varadkar has ruled out a US-style loans scheme for Ireland, but had left the door open to the type of loan scheme that exists in the Netherlands and Australia.