Teachers to be trained to help reduce pupils’ anxiety 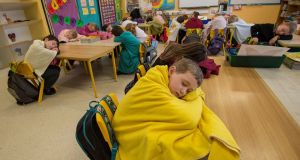 Heath National School in Portlaoise, Co Laois. It is one of a number of schools which have turned to mindfulness. Photograph: Brenda Fitzsimons

Thousands of teachers in disadvantaged schools are to be offered training aimed at reducing pupils’ anxiety and boosting their resilience.

A growing number of schools have been turning to yoga and mindfulness to help students, and Minister for Education Richard Bruton is now planning a large-scale training programme for teachers across more than 900 schools targeting emotional wellbeing.

Under the new initiative primary and secondary teachers in disadvantaged schools will be able to avail of training in two training programmes with a track record in building resilience.

Incredible Years, a classroom management plan, has been shown to reduce behavioural difficulties and strengthen the social and emotional competence of children at primary school.

Another intervention, the Friends programme, has been found to help reduce anxiety and promote coping skills in young people from four years to 18 years. This is to be made available in both primary and secondary schools.

Mr Bruton said both programmes were internationally renowned, and would help children develop the emotional resilience and coping skills “which are key for flourishing in modern society”.

He said the announcement was part of his wider ambition to make Ireland the “best education and training service in Europe within a decade”.

Teachers in more than 900 Deis (Delivering Equality of Opportunity) schools are being invited to apply for places on these training programmes over the next three years.

A recent survey by the Irish Primary Principals Network found that more than a quarter of its members reported a spike in anxiety levels in their schools. Research by the Royal College of Surgeons in Ireland also indicates that as many as one in five young people have a mental health disorder.

The new training programmes come at a time when there is a greater emphasis on students’ wellbeing in the education system.

The first wellbeing classes at second-level began last month, and form a key part of the new junior cycle curriculum. They are aimed at enhancing students’ physical, mental, emotional and social wellbeing.

The programme will involve 300 hours of timetabled learning over the three years of junior cycle, building up to 400 hours by 2020. It is based loosely on existing programmes such as civics, PE and Social, Personal and Health Education, along with guidance education.