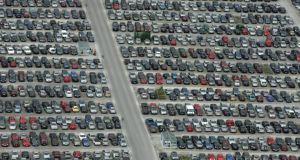 Insurance companies estimate that €50 of every annual motor premium relates to bogus claims and the legal cost of fighting them. Photograph: Frank Miller

Evidence is emerging that the public is running out of patience with the number of compensation claims cases that are based on dubious evidence related to staged vehicle crashes.

A survey of 1,011 Irish drivers over the age of 17, carried out in October by Red C Research on behalf of Liberty Mutual Insurance, found that 95 per cent of respondents support the suggestion of taking punitive measures against insurance fraudsters.

More than half of people (51 per cent) supported fraudsters being charged, even though 26 per cent of people committing insurance fraud claim to believe they are doing nothing wrong.

Three-quarters (76 per cent) say fraudsters do it because they think they will get away with it. Thirty nine per cent of people believe the perception that there are no real penalties and this contributes to the problem, and 56 per cent believe insurance fraud is a victimless crime.

A growing feature of insurance fraud is fake, or ghost, brokers who target inexperienced drivers and foreign-born nationals unfamiliar with the system here and often not having English as a first language.

The fake brokers thrive on social media, especially Facebook, where they often use the corporate livery of established insurance companies on their home page to enhance their believability.

Another company, Aviva Insurance, has identified about 10 ghost brokers operating in Ireland but, between them, they are associated with between 300 and 400 Aviva policies, creating a potential liability for the company of some €500,000.

There are believed to be many more such brokers – and probably thousands more dubious insurance policies issued through them.

“Ghost broking is linked to inception fraud,” says Deirdre Ashe, director of customer and markets at Liberty. “This is where incorrect details are front loaded on to a policy to adjust the premium that is charged for the risk in question. There are numerous examples where would-be customers engineer on the front end.”

Last summer, the industry put proposals to the Government via the Cost of Insurance Working Group (CIWG). Insurers want a dedicated, centralised unit within the Garda Síochána dealing with insurance fraud (which in the main relates to vehicle insurance).

Modelled on the UK’s insurance fraud enforcement department (Ifed), a specialist unit of the City of London Police economic crime directorate, it would, like Ifed, be funded by the insurance industry.

“The Government is reluctant to do that,” says Ashe, “although to be reasonable, that’s the model in the UK and its working well.”

However earlier this month, Minister of State with special responsibility for Financial Services and Insurance Michael D’Arcy told a fraud conference in Dublin that the industry could fund an anti-fraud database but it could not run it.

The first is to amend the Civil Liabilities Act to require a claimant to swear, via an affidavit, that their claims are honest.

“The plaintiff would be required to swear a verifying affidavit as to the truth of all assertions, allegations and information provided . . . In other words, this is about ensuring that the evidence admissible is actually valid and real evidence. That is going back to, call it what it is, lying,” says Ashe.

The next issue, as insurers see it, is judicial consistency.

“It is very ad hoc at the moment,” says Ashe. “We have judges of particular experiences, moving from family law, for example, on to looking at these type of cases. So we would be requesting that, like any other profession, when experts transfer from one case profile to another, they are equipped with reasonable understanding of some of the guidelines in terms of what similar awards have been given and various outcomes.”

On the day Ashe spoke to the Irish Times, a High Court judge made an award that was €8,300 above the highest amount recommended in the Book of Quantum, the official guide as to maximum awards for specified injuries.

This prompted a weary Tweet by Isme, a lobby group representing Irish small and medium businesses: “Another day, another award that exceeds the range values set out in the Book of Quantum.”

The third reform is the creation of a Garda anti-insurance fraud unit and database. In England, the insurance industry’s main anti-fraud co-ordinating body, is the Insurance Fraud Bureau (IFB), founded in 2006 in response to increasing numbers of staged crashes.

The IFB works closely with UK police and has access to three digital data bases, known by the acronyms CUE, MID and MIAFRT. Collectively, these hold the records of all motor insurance policies (allowing for the rapid identification of uninsured vehicles), all personal injury and other claims (when and where they were initiated, plus a general description of the event and the result of the claim), and the details of stolen and written-off vehicles.

Some of this information is available in Ireland through Cartell, the online vehicle history information service that works closely with the MIAFTR.

While the new General Data Protection Regulations (GDPR) pose challenges, Ben Fletcher, director of the IFB, says data is of little use if not shared.

“We take these data bases and analyse the trends and thereby identify what fraudsters are up to,” he says.

In the IFB’s experience, motor insurance fraud tends to be highly organised and often transnational, with criminal gangs setting up ghost brokerages that are linked to equally bogus claims management companies.

The fake companies offer hand-holding guidance to claimants dealing with lawyers and expert witnesses . . . and also provide camouflage for fraudsters.

“The legitimate claims management companies are there to help someone with a claim, as a one-stop shop. The fraudsters are taking that legitimate business model and recruiting people to launch frauds,” says Fletcher.

In the UK and Ireland, staged crashes are an established method of motor insurance fraud. In the UK, the phenomenon of induced crashes is increasing and this is being detected also in Ireland.

An induced crash is where the fraudster positions their moving vehicle in front of another uninvolved driver and then, for no reason, slams on their breaks causing the innocent driver to crash into the rear of the fraudster’s car.

“Data sharing is so important in taking the fight to these people,” says Fletcher. “By aggregating and joining the data together, you see patterns. If you are creating hundreds of fake accidents, that will start to show repeating characteristics.

“For instance, one that I know of involved a stooge driver being in numerous crashes at the same roundabout. The guy would go out to his favourite location and just stage the same crash over and over and over.”

The problem of insurance fraud being seen as a victimless crime (56 per cent of respondents in the Red C poll) is one that infects public perceptions and, according to Fletcher, the legal system as well. Insurance companies estimate that on average, €50 of every annual motor premium relates to paying bogus claims and the legal cost of fighting them.

Fletcher also spoke of the responsibility of others, people he called “professional enablers”, whose behaviour is also seen by insurers in Ireland but about which little has been done to date.

“There are professional enablers – solicitors and medics willing to lend their professional expertise to claims that are patently false,” he said.

“You see examples of [legal and medical] firms using the system for their own personal gain. For example, a medical expert seeing dozens of people in a single day and claiming to have given each a thorough examination during what can only have been an encounter for a few minutes. That is not doing their job.

“If it looks that some of the experts involved [in a claim] are criminal, we will refer them to the criminal authorities or follow the civil route and seek to be a disrupter to their activities.”

“There is often a mutual interest between the industry and the police, especially in large-scale frauds because such people are likely to be involved in other criminality.”

Deirdre Ashe mentions another UK police practice she would like to see adopted here – the police caution.

“They serve hundreds of these,” she says. “They have to do them on lighter evidence and it doesn’t result in anything going through the judicial system but what a caution does is it hampers your civil liberty quite a bit. You can’t get into the United States, for example. Some financial institutions will look to understand what cautions you may have and will decline to do business with you.

“So it restricts you. We’ve never looked at cautions.”