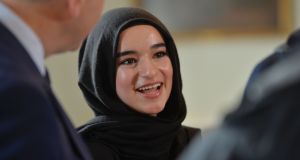 Suaad Alshleh: ‘I would say, never lose your ambition, work hard and . . . you’ll get there.’ Photograph: Alan Betson/The Irish Times

This year she secured a place studying medicine at the Royal College of Surgeons Ireland after an impressive Leaving Cert which included top marks in chemistry and biology.

And on Wednesday, she was was named as the first recipient of a new State scholarship for disadvantaged students studying science in higher education.

She was formally awarded the €5,000-a-year scholarship, which recognises the work of Irish Nobel Prize winner Prof William C Campbell, by Minister for Education Joe McHugh.

Along the way, she has faced the kind of challenges few other Irish students could imagine.

She and her parents fled Syria in 2011 and relocated to the United Arab Emirates for a few years before seeking asylum with her mother in Ireland in August 2016. They were later joined by the father.

They spent nine months in a direct provision centre in Co Monaghan waiting for their papers, after which they moved to Portlaoise.

“It was probably the hardest time of my life. Those nine months, I’ve kind of blocked them out. But look where I am now. Without that experience, I probably wouldn’t be here. I’m very grateful,” she says.

She studied at Mountmellick Community School – because her local school didn’t offer Leaving Cert chemistry – and had to rely on a lift from a neighbour because they didn’t have a car.

And she also had to deal with being seen as an “alien” wearing a headscarf in communities which were not always used to diversity.

While her experience in direct provision was tough, she has nothing but praise for the support she has received since arriving in Ireland.

“It was difficult at first. But I’ve had very positive experiences with the Irish community. I’m very happy to be here. I have loads of Irish friends and wouldn’t want to be anywhere else. This is my home now.”

Her mother, Wesam Jouma, and father Issam Alshleh – both engineers – watched proudly and took photographs as she spoke to the media.

“It’s a spectacular achievement, we’re so proud,” beamed her mother. “She worked her heart out, that’s it !”

As for Suaad, she feels a sense of responsibility: as a member of the Syrian refugee community, she wants to show there are good news stories.

“As a Syrian refugee, I’m incredibly grateful for the Irish community as a whole for embracing me as one of their own and supporting and encouraging me, through initiatives like this, to realise my dream of studying medicine.”

“I hope to get through this very tough degree. I want to be a successful doctor and am very interested in surgery.”

She also wants to send a message to other young people in direct provision or in challenging circumstances.