Are you ready for what it takes to get a graduate job nowadays? 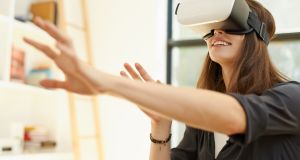 Many employers are relying less on grades and more on virtual reality and advanced psychometric testing when hiring college gradautes. Photograph: iStock

Job applications can be stressful. First there’s the pressure of making sure the CV has highlighted all the right skills, and there are no spelling mistakes. Then there’s the first and second round of interviews and, often, a long wait to hear back.

So how might candidates feel about adding a virtual reality assessment round?

It’s all part of a wider move among recruiters to develop new hiring methods, including advanced psychometric testing, strengths-based interviewing and AR/ VR. So, why are these companies doing it – and is it all really necessary?

“After the initial application, candidates fill out a profile and a short two-to-three minute psychometric test. If they are successful, this is followed by a short online assessment with no time limit, combining real-life tasks with augmented reality.

“If candidates make round three, they are invited to a graduate assessment centre for a strengths-based interview, a micro-case study and the VR assessment.”

How does the VR assessment work? “We use CAPP virtual reality assessment, which is the world’s first VR assessment platform, truly immersing candidates into various scenarios to provide fair and levelled measurement,” Rose explains.

“On the day, there are two surprise VR environments that candidates find themselves in using VR headsets, both of which are evaluating different skills. We know that when people are under stress or in a face-to-face interview, they may not be at their best. Our online application allows flexibility to make the process easier for people that may have learning differences, such as dyslexia.”

Brendan Baker, head of careers at Maynooth University, says the world of graduate recruitment has changed significantly over the past decade.

“Application processes are online now. They use software that screens for certain keywords or phrases: we warn students not to be ‘passionate’ about everything and advise them to use terms that match the job description.

“For firms that invest wisely in good psychometric tests – which test for verbal, numerical and deductive reasoning, it can pay off.”

Perhaps the biggest driver behind the changes at firms like Accenture is ensuring inclusion and diversity.

Nearly three-quarters of senior managers are male – and primarily straight, middle-class and white – and there’s a large body of evidence suggesting that managers are more likely to hire people who look like them and think like them.

Firms increasingly recognise, however, that diversity of thought and experience is vital to avoid stagnation and calcification.

Digital innovations throughout the hiring process remove unintentional bias towards candidates (particularly on grounds of gender, ethnicity, age, class and sexual orientation) and ensure the most qualified candidate gets hired, says Rose.

“We value diversity of thought too, so there’s no right or wrong answers for the assessments: two candidates might approach the task very differently but both of their conclusions could be equally valid.”

Is there a risk, however, that someone may lose patience with a long recruitment process, or that a firm might be asking too much?

Aidan is a recent third-level graduate who reached the third round of a recruitment process at a major US tech firm.

“First, I was interviewed over the phone by a HR manager. When I got through that, it was onto a video interview. And then I had to make a video demonstrating how I use their CRM system.

“It’s fair enough that they want to be sure about who they hire, but this process took over a month, and was fairly stressful. I fell down in the third round; they told me to consider applying to them again, but I just don’t see it happening now.”

“The structure of the programmes appealed to me because of the professional training provided early on and the variety of work you are exposed to.

“For many of them, you have to write short pieces about different processes – I wrote about fintech for one, even though I had no interest in it.

“But Accenture asked me to write about myself and what made me different, so straightaway I saw the importance of people, inclusion and diversity in the company.”

Postgraduate jobs in academia vs industry: ‘We have to be honest with PhD students . . . Getting an academic job is hyper-competitive’

While many of today’s graduates are eagerly eyeing up their first big job, others want to stay in academia forever.

Postgraduate researchers and PhD students are often working towards an academic career, but few universities and institutes of technology are brave enough to admit that permanent academic careers are, effectively, out of reach for the large majority of PhD students.

UCC, however, is coming out with its hands up. Mary O’Regan, HR research manager at the university, has devised Odyssey, a programme aimed at helping postgraduates researchers, PhD students and postdocs move out of academia and into industry.

“Developing Odyssey was a challenge,” O’Regan says. “You’re asking people who have dreamt of a particular career to leave academia. We give them the facts and statistics about academic careers today.”

O’Regan’s research, which looked at journal articles, international policy documents, EU policy and other sources showed that 96 per cent of Stem (science, technology, engineering and math) PhD holders in the UK leave academia while 3.5 per cent become permanent research staff and just 0.5 per cent become professors.

Between 2000 and 2009, the number of doctorate holders grew by 38 per cent in OECD countries and this number continues to grow.

Globally, there has been a continuous decline in the number of permanent academic positions in universities and increasing dependency of researchers on temporary and short-term, third-party funding.

“Getting an academic job is hyper-competitive: to get an academic position, you have to show that you can bring in grant funding but, to get this funding, you’re competing with people who have been in the system for 20-30 years and have an incumbency advantage.

“We’re telling them something they may not want to hear. I thought they’d be throwing rotten tomatoes at me, so I started slowly with focus groups, and now we have waiting lists for the programme.”

Few – if any – higher-education institutions have been brave enough to tell the truth about the nearly insurmountable pathway between PhD and academic career.

But, at UCC, the whole institution, including the president and the vice-president for research, have supported Odyssey.

“It’s a transformative programme that reorients people towards the great opportunities they can have in industry.

“We meet one-on-one and in groups. It’s about helping them use the skills they have, and introducing them to postdocs, from both Stem and humanities, who have pivoted away from academia.”

It can be a frightening revelation for PhD candidates. “I really want people to do PhDs,” says O’Regan.

“If they want to work in academia, I don’t want to discourage, but they deserve to know all their options and all the facts.”