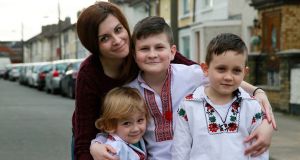 Diana Megherea, a Romanian speaker, who is mother to Steven (4), Gabriel (10) and Marius (6). Photograph: Nick Bradshaw 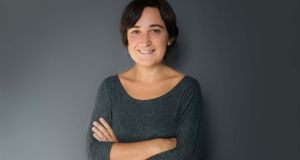 Ireland is speaking more languages than ever before with Polish, French, Romanian, Lithuanian and Spanish all echoing through our family homes.

For years, there was a belief that bilingual children lagged behind academically and intellectually.

More recent studies, however, comprehensively show this is untrue: switching between two or more languages gives the brain a dexterousness and improves our attention, planning, memory and problem-solving skills.

Evidence shows bilingual children score better across a range of cognitive tests than their monolingual classmates.

In an Irish context, speakers of a second language have an advantage in a jobs market that places significant value on both their linguistic and cognitive skills. And bilingual children who sit minority language subjects in the Leaving Cert consistently get top grades.

In spite of the clear benefits, many newcomer parents have concerns about bilingualism.

Dr Francesca La Morgia is assistant professor in clinical speech and language studies at Trinity College Dublin and the founder and director of an organisation called Mother Tongues, which supports parents in passing on their native language.

“For many parents, it is their first time in Ireland and they weren’t raised bilingually themselves, so they wonder about the best approach for their children,” says La Morgia, who moved from Italy to Ireland in 2004 and now has children here.

“They want support in preserving their native language and raising bilingual children, but they have real worries about language delay and the child’s vocabulary.

“They have practical questions: is it okay to mix two languages? Is it all right if I speak Italian to the children while my husband talks to them in Polish, while at the same time they learn English in school? They worry that their children won’t be as proficient or may fall behind.”

The 2016 census showed that more than 600,000 Irish residents spoke a foreign language at home.

But what do these new languages mean for our education system? Should we embrace them, or is there room in the curriculum? And is it a good idea to encourage bilingualism in children?

“Many parents worry their own language will be lost over time, while Irish-speaking parents who want to maintain Irish in the home can also feel under pressure,” says La Morgia.

“There are, of course, differences between the experiences of Irish-speakers and migrants, but there are also similarities that people don’t always see. They’re both trying to preserve a language against every trend.

“With Irish and other languages – particularly languages with small numbers of speakers here, such as Croatian – it can be hard to find a community of speakers.

“If a parent thinks their child will never live or travel in Croatia, they may also sometimes think they’d be better off learning French or Spanish instead. But when a child grows up speaking more than one language, whatever those languages are, they reap the social and cognitive benefits of bilingualism: greater attention, focus, tolerance, creativity and switching between tasks. And we also know that once a person has learned two languages, it’s easier for them to pick up a third or fourth language.”

Late last year, Minister for Education Richard Bruton launched Languages Connect, Ireland’s strategy for foreign languages in education up to the year 2026. The strategy acknowledged “the need to change our mindset around language learning”, but the focus was on post-primary, further and higher education. It was relatively quiet on what needs to happen in primary schools, where the modern languages initiative was axed at the height of the financial crisis in 2011.

It conceded only that foreign languages could be integrated into the curriculum rather than as a stand-alone subject – research shows this is an effective way of teaching them – and that the upcoming primary review will “give consideration to including foreign languages in the senior classes”.

To address the gap at primary level, La Morgia recently launched Language Explorers, a pilot programme for the whole primary cycle where children will learn about languages and be encouraged to share and use their language in their homework or in class, including translating for teachers and friends and writing bilingual stories.

“Younger children pick up language better than teens or adults,” says La Morgia. “We need to start teaching it in primary school.”

For some parents, passing on their native language isn’t about heritage or academics: it’s simply a matter of survival. They arrive in Ireland with little or no English language skills and can be reliant on their children to translate for them.

Enter Dr Peter Sheekey, founder of Intercultural Language Services, a project supported by the Social Innovation Fund Ireland. It provides a free drop-in service where adults can learn English from volunteer teachers, in small groups and in a round-table context.

“There are nearly 40 nationalities from China to Venezuela coming in and out of our centres in Dublin 3 and 8,” Sheekey explains.

“It can be difficult for these parents to find the time to learn the language. We focus on giving them survival skills. This includes reading a letter from a landlord, organising a doctor’s appointment and getting a CV together. Increasingly, we hear that teachers can’t communicate with some parents, and parents can struggle to help their children with homework.

“We know that many struggle with English, but there’s a whole swathe of people we’re not reaching, and we need greater funding to support literacy.”

On May 3rd in the Long Room Hub at Trinity College Dublin, the Irish Research Network in Childhood Bilingualism and Multiculturalism will host a talk on the cognitive benefits. See ChildBilingualismResearch.com for details.

One parent’s story: ‘My husband and I talk Romanian at home, but the kids answer me in English’

Staying connected to a second language can be a struggle in a society dominated by English.

When Diana Megherea talks to her three sons in Romanian, they often respond in English.

“Gabriel, my eldest boy, was born in my country of Moldova, while the younger boys were born in Ireland,” she explains.

“Gabriel was three when he came to Ireland and he didn’t have any English, but he picked it up fast. Now the kids go to creche or school here and they’re all used to speaking English.

That has changed in recent times and Megherea increasingly finds herself allowing them to respond in whatever way comes naturally.

“I worried about language all the time, but now I see that as they get older – and particularly as they are doing Irish in school – they naturally grasp the importance of different languages.

“Recently, one of my boys wrote me a Mother’s Day card in Romanian and another has a new classmate who is from Moldova and he wants to speak to him in Romanian. Our children will always want to talk our language.”