Students were denied teaching courses due to maths ‘anomaly’ 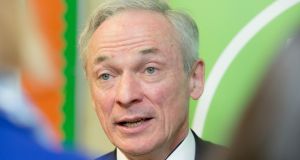 In correspondence with colleges, Minister for Education Richard Bruton has now pledged to lower the entry grade for maths to a H7 from next year. File photograph: Gareth Chaney/Collins

A group of high-achieving students who secured enough points to study primary teaching but were denied entry due to an “anomaly” in maths requirements are to be offered places in college.

Applicants for teaching courses are required to meet minimum entry requirements for certain subjects – such as maths, Irish and English – before their overall CAO points are taken into account.

Last month it emerged the Department of Education had directed colleges not to accept primary teaching students who scored new H7 grades (30 to 39 per cent) on the higher level maths paper.

However, the entry requirements did accept students who scored as low as 40 per cent (an O6 grade) on the ordinary level paper in maths, even though this is a much lower grade.

Up to 13 students who secured the points for primary teaching are estimated to have been denied entry on this basis.

In correspondence with colleges, Minister for Education Richard Bruton has now pledged to lower the entry grade for maths to a H7 from next year.

In addition, senior officials have asked Dublin City University and University of Limerick, which both run Bachelor of Education programmes for primary teaching, to accommodate the students who were denied entry this year.

One of these students scored 520 points and a H7 in maths but was refused access to the primary teaching course.

Her father said he had been shocked to find an O6 was considered a greater academic achievement than a H7.

“We were celebrating her great achievement until we discovered this, and we fear she may have to repeat her Leaving because of this anomaly,” he said.

In a letter to universities, a department official said the change in entry requirements was in line with its overall policy of “supporting a better transition from second level to higher education”.

“It would be appreciated if you could arrange for your university to make the necessary changes with the CAO to have the Leaving Certificate results of candidates who applied for places on the B Ed programme reconsidered in the context of the Minister’s decision and take the appropriate steps to accommodation them.”

In addition, Mr Bruton is to raise entry requirements for primary teaching in other subjects such as Irish and English from 2019 onwards.

In Irish, students will be required to score a H4 (between 60 and 70 per cent) higher level. This is up from the current H5 (50 to 60 per cent) required at present.

In English, the current minimum requirement for a H7 (30 to 40 per cent) at higher level will remain.

This means primary teachers will need to be much better Irish students, while in English and maths they will be accepted on to courses with scores of between 30 and 40 per cent which, until recently, were labelled as E grades or “fails”.

Correspondence from the Department of Education states that the review of entry grades was aimed at equipping teachers with the “right skills for 21st century teaching and learning” and the overall vision of making the Irish education system the best in Europe over the next decade.

The revised grading also took into account advice prepared by the Teaching Council, an advisory body on education issues, the letter states.