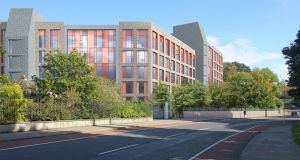 The proposed new UCD student accommodation in the Roebuck Castle and Roebuck Precinct.

An application for a €300 million on-campus accommodation complex for 3,000 more students at University College Dublin (UCD) has been submitted to An Bord Pleanála for “fast-track” planning approval.

The State’s largest university has become the first applicant to use the new Strategic Housing Development system which allows applications for schemes of more than 100 homes, or blocks of 200 student bed spaces, to be made directly to An Bord Pleanála, by-passing the local authority decision phase.

To date 17 developers have sought pre-application consultations with the planning board, most for large-scale housing schemes, but UCD is the only developer to make a formal application to the board.

The board has until the end of the second week in January 2018 to make a decision on the university’s application.

The new scheme would almost double the student population living on the Belfield campus, bringing the number of bed spaces from 3,179 to 6,185.

A total of 512 apartments with 3,006 beds would be built in seven blocks, with one of the blocks including a student facility centre,with a function hall, gym, and health centre, with studio accommodation above. Shops and services, including a bank, convenience store and café’s will also be built.

The new apartments would be in the Roebuck Castle area of the campus, but the university said no works are proposed to the protected structure, except for the demolition of modern extensions and buildings in the vicinity of the site.

The university is also seeking 94 car parking spaces, including a basement-level car park and two surface car parks. Approximately 679 existing spaces will be displaced due to the development, with an additional 305 spaces to be decommissioned across campus by the time the project is completed.

Approximately 1,503 cycle parking spaces are included in the application.

The Higher Education Authority has estimated a need for about 25,000 more beds for students nationally with the shortage of student accommodation at its worst in Dublin, where students are competing in a high-cost rental market with families and young workers.

Almost one quarter of students attending UCD will have access to on-campus housing once the new apartments have been built.