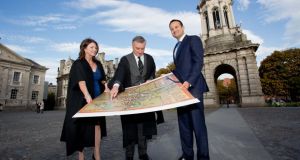 Taoiseach Leo Varadkar looks at a map of Dublin from 1610 with Trinity’s registrar Prof Paula Murphy and provost Dr Patrick Prendergast at an event to celebrate 425 years since TCD’s founding. Photograph: Tom Honan

Taoiseach Leo Varadkar has said while third level students should make a contribution toward their education, he could not support a system that left them repaying substantial debts.

Addressing an event celebrating 425 years since the foundation of Trinity College Dublin, his alma mater, Mr Varadkar said educational financing is “one of our great challenges” and the Government was committed to establishing a “substantial multi-annual funding base”.

In the run-up to next month’s budget, he said, recommendations of the Expert Group on Future Funding were under consideration to find a consensus approach.

One of these is for an increased contribution through the National Training Fund, made by employers of highly skilled and educated workers.

“This could potentially deliver up to an additional €200 million per annum by 2020,” Mr Varadkar said, adding that such a move would require greater involvement from industry in how the money was spent.

“And while certainly from my own point of view I think it is appropriate that students, as they do now, should make a contribution to the cost of the course that they study, from which they derive so much benefit, I certainly could not stand over an outcome that left Irish students graduating with the kind of debts that American or English students do,” he said.

“I think it is difficult enough for young people these days to buy their first homes and pay the rent without being saddled with enormous debts in their 20s and 30s in a way that is the case in England and the United States. ”

The Taoiseach’s address opened the Trinity Symposium on its 425th anniversary, which features talks from six historians and which was described by professor of modern history David Dickson as a “sort of virtual museum” of the university’s lifespan.

Mr Varadkar is the first Trinity graduate to attain the office of Taoiseach. He began his studies, he told the gathering, 20 years ago as a “shy law student, uncertain about myself and the world”.

Framing the college’s history against modern events, he noted that “Brexit has the potential to affect every sector of education”.

Among the issues he discussed with British prime minister Theresa May on Monday was how Brexit might affect research and teaching links between Ireland and the UK, he said.

“Our position is that we would like to see the Common Travel Area maintained, protecting the free movement of people and the mutually beneficial flow of students, staff and researchers.

“No matter how difficult things have been on this island, Trinity always acted as a bridge between north and south. Now, more than ever, we need bridges not borders.”

Historian Dr John Bowman said the 20th century had been its most transformative era.

“In 1900 Trinity was a ‘cold house’ for women, for Roman Catholics and for Irish nationalists,” he said. “All of that changed in the course of the 20th century, indeed by 1970 Trinity was unrecognisable from the university it had been in 1900.”

Provost and president of Trinity Dr Patrick Prendergast said a comparison even of the 1960s and 1990s showed the student body had grown, “and many more of these were women, and Catholics, and Trinity was much more embedded in national life”.