Students speak up: How pupils’ voices are finally being listened to 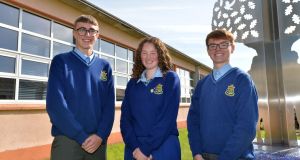 Nobody ever expected Liane McCarthy to drop out of school. She was always academic, and she loved learning.

“It was really hard to catch up and this made my mental health even worse,” she says.

“If you miss school, if you’re sick with the flu or mental health difficulties, or even if you have issues at home, the curriculum is overwhelming and teachers, with the best will in the world, just don’t have time to help you. I didn’t want to just scrape a Leaving Cert.”

McCarthy spoke to a friend who had decided to leave school for similar reasons.

“She had gone into Youthreach and was thriving. As soon as I started in Youthreach myself, my self-esteem shot up. Teachers were lovely and helpful, classes were small – there were just four of us – and we could all work to our own pace.

“Some of the class did a Leaving Cert, some focused on vocational subjects and I got a QQI level four in subjects including work experience, gardening, maths, IT, business, personal and interpersonal skills, cultural studies and communications. We shadowed students for a day on a college course, which would be unheard of in most secondary schools.”

There is already ample evidence, known to policymakers for decades that, for various reasons, about one in four students find the current exam-focused, points-driven system totally unsuitable for their needs.

Indeed, this was factor that was key in driving junior cycle reform and, under Solas, expanded further education, training and apprenticeship options

McCarthy is one of hundreds, if not thousands, of students across Ireland who want to see the Leaving Cert substantially overhauled.

Last year, the National Council for Curriculum and Assessment (NCCA) began their consultation on senior cycle reform with teachers, parents and, crucially, students in more than 40 schools throughout throughout Ireland.

Some of the initial suggestions from this consultative model include that the Leaving Cert would be more immersive, that group and project work would form a key part.

Another, perhaps more radical idea, is that Transition Year would be abolished and that its most successful elements would be incorporated into a three-year senior cycle model that includes extracurricular credits, work experience and volunteering. The ongoing consultation is now entering phase three.

Athlone Community College, one of the largest schools in the State, took part in the process.

“The junior cycle reforms came down from on high and were foisted on us, but this senior cycle review has involved the stakeholders in education. Schools that took part in this process feel that the NCCA really listened to what we had to say.”

Dr Emer Smyth of the Economic and Social Research Institute has led the research for the NCCA, part of which involved researching what upper secondary is like across various jurisdictions.

“We heard that students don’t want to just sit there and take notes,” she says. “There was a feeling of frustration with an over-reliance on exams, which many see as a memory test that is not suited to all students. There was a positive view of Transition Year. And while parents and teachers spoke of the stress that the Leaving Cert can bring, this was particularly emphasised by students.”

“In Deis [designated disadvantaged] schools, teachers were more critical of how the current structures do not work for all pupils.

“The students we spoke to want radical change, not just a few tokenistic tweaks. They also want to see an overhaul of the CAO points system which, they feel, adds to the pressure.

The Ombudsman for Children Dr Niall Muldoon has praised the NCCA’s approach in “actively listening” to pupils’ voices.

“We’re putting children at the centre and for too long we haven’t done that,” he says.

“They are a crucial partner. They need to know they’re being actively heard – as opposed to just being given an opportunity to say something. It means things have to be taken on board and used. That’s what we’re starting to see... without it, we won’t see a system that works.”

He says he plans to use the NCCA’s approach as evidence to show other public sector bodies that this approach can be taken in other areas.

“It can be done. It takes a lot more organisation, and a little bit more time, but it creates a far, far better output.”

McCarthy, now studying for a level six certificate in digital media, would like to see young people’s voices reflected in future changes.

“The whole points system is troublesome,” she says. “It is detrimental to young people’s mental health.

“The Leaving Cert is causing depression and anxiety. Youthreach has been a longer road, but it’s brought me on from a time when I could not foresee being happy and was terrified of leaving my house. As school was, I would have barely scraped a pass, and gone on to a course I didn’t want.”

“We work off the evidence, but it’s worth making the point that this exercise has shown the value of listening to young people on issues that affect their lives,” says Smyth. “They are articulate and more than able to reflect on what works for them and what does not.”

St Joseph’s in Rush, Athlone Community College and Scoil Ruáin in Tipperary were among the schools that took part in the NCCA’s consultation on senior cycle reform.

At St Joseph’s, students Rachel Dillon, Senan Monk and Kadem Price are in the senior cycle. They’re all prepared to put the work in but wish there was more project work.

“It would be great if we could focus on something we were particularly interested in and could benefit from in the long run,” says Dillon.

While most students would like to see much more continuous assessment, Monk cautions that it could add to a students’ workload if that project only counts for as little as ten per cent of their overall mark.

Price, who took part in the round-table discussion, says that he’d like to see an element of work experience, more project work, as well as acknowledgement of attendance.

Their teacher, Hazel Dooley, says that her students flourished at junior cycle but are “back feeling caged” by senior cycle demands and that there is a gap between the two cycles which needs to be bridged.

Fallon says that, while it does prepare students with life skills, these count for little when it comes down to the terminal exam.

Moran says the senior cycle is an obstacle to positive mental health. McGrane says time must be created for students to have a life and interests outside school.

Rafferty, who skipped TY, says he has missed out on extracurricular activities and he’d like to see these introduced as a subject, and that there should be more emphasis on life skills and wellbeing.

At Scoil Ruáin, Chloe Griffin, now deputy president of the Irish Second-Level Students Union, told the NCCA researchers that more practical work would be welcome, andshe felt the facilitators were genuinely engaged and interested. “But we need this consultation to be ongoing and we need to be taken on board,” she says.

Leonard and Griffin think Irish should be broken into two subjects, with one focused on oral language skills and the other on literature.

Several of the students said that extracurricular activities, including sport and hobbies, all go out the window during the intense senior cycle years, with several suggesting that a reformed system would ensure students get credit for taking part in clubs, activities or volunteering work.

This could potentially work along the lines of DCU’s Uaneen module, named after the late broadcaster Uaneen Fitzsimons, where students who take part in extracurricular work reflect on what they have learned and how they have developed as a person.