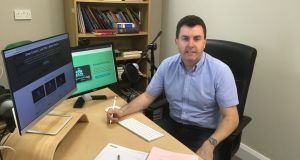 If the secondary school students in John Gavin’s Irish class thought they were getting off lightly when the schools closed, they had another thing coming.

Gavin broadcasts his classes from a home-made studio equipped with a 27-inch iMac, gigabit broadband and professional-grade microphones. It allows him to conduct quizzes in real-time, screencast tutorials and share video from his computer screen.

“Essentially, I’m delivering classes online – it’s just the class isn’t physically there with me. They don’t miss out on anything,” says Gavin from Tulla, Co Clare.

But his students – whether they like it or not – are the lucky ones.

The dramatic shift from classroom to online learning since the closure of schools just over a week ago has come at a cost.

Many students are losing out because they do not have access to devices and broadband, or their teachers are ill-equipped for remote teaching.

The prospect of long-term school closures raises the chance that some pupils – especially those in exam years – could be disadvantaged considerably.

“The idea that all teachers out there are equipped to do remote teaching from home is a complete red herring,” says Gavin.

“They might have a good set-up in school using Office 365 or Edmodo or Google Classroom. But many live in remote, rural locations where they don’t have fibre broadband or decent computer equipment.”

One teacher in a disadvantaged school, who declined to be named, said she was already worried about the impact on students.

“I’m personally worried that my students are behind already because we are struggling to get systems and emails set up when other schools already had this stuff up and running,” she says.

Michael Hallissy, a former primary school teacher and founding partner of H2 Learning, agrees that some teachers and schools are at a disadvantage when it comes to online teaching.

“There is a challenge here in terms of access and equity,” he says. “There are teachers who do not have robust internet and they may not have some of the skills, but they are absolutely brilliant teachers,” he says. “This was something that was not on their radar last week.”

Shifting from classroom teaching to remote teaching is not automatic, he says, and requires training and support for those involved.

“You really need to carefully design learning for online, it is not the same as face to face. People need to be trained,” says Hallissy.

The online sharing of educational resources may be useful for those who are digitally trained, he says, but it may overwhelm other teachers who are just finding their digital feet.

“We were all trained to teach in a room in a space with the other learners, so there is a need to give teachers support around what those models of learning look like,” says Hallissy.

The inequity is not confined to post-primary schools. The deputy principal of a Waterford-based disadvantaged primary school believes the current crisis is only making divisions mare apparent.

“Consider the children with no electricity in their houses; people have been laid off. I know of a family that, on a regular day, the electricity bill is the last thing to be paid,” says the deputy principal, who declined to be named as she did not want to identify the school.

The home community school liaison teacher in the school went to a toy store following the school closures to source items for some of the children, she says. He delivered things such as colouring pencils, crayons, colouring books and Lego to students who are without.

“Some of our students are without a desk, never mind a laptop,” she says.

Most teachers say greater training and support for teachers for remote education is urgently needed.

One short-term measure which could make a big difference is that schools could provide their in-school devices to students while the buildings are closed.

“All those iPads or notebooks or laptops are useless in the schools right now,” says Gavin, who also runs Leavingcertirish.com, a revision website for students. “Give them to the students now so they can make use of them.”