Ask Brian: Giving in to your child can buy short-term peace and quiet – but at what cost? 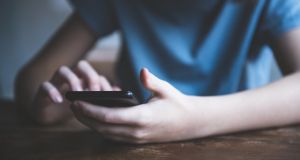 My daughter is in fifth class and is putting huge pressure on us to allow her to have a mobile phone. All her friends have one, and we feel bad cutting her off from her friends. But we’re worried it will be a source of anxiety and stress for her.

I discussed the issue of anxiety and stress among young people with a group of primary school principals and teachers recently. They spoke about how the death of a grandparent can be as traumatic as that of a parent or sibling to primary aged children.

But what really shocked me was their belief that access to phones and social media among primary school children is creating huge stress and anxiety in their young lives.

Teachers recounted incidents of children having emotional outbursts at eight and nine years of age directly related to exposure to social media, including games classified as appropriate for 16-18 year olds.

One child was reported to have said he was so annoyed about some issue that he would commit suicide. The teacher gently explored the issue with the child, to discover that he had no idea what the term meant, but that it was part of a game he and his friends played online, to which they should, of course, have had no access.

As a loving and caring parent you are trying to allow your child to develop in an age-appropriate way by resisting her demand for access to a phone and to all that having one exposes her.

Sadly, once phones are owned by some of her peer group, it is inevitable that many children who don’t have phones will be exposed to content utterly unsuitable for their age group.

Our children today live in the world of social media. Tic Tok and WhatsApp groups are their channels of communication. They all carry risks. Tic Tok accounts are public by default, meaning anyone can see their videos, send a user direct messages, and use their location information. Parents may believe they can monitor their children’s activities on WhatsApp, but children often have a fake account specifically to be shown to parents, and a hidden one for their own use.

To deny your child ownership of a phone can partially lock her out of a world in which many of her peers live. But, from discussing this with primary school teachers, it also exposes her to a world which can end up elevating her stress and anxiety.

The relief parents get by allowing their children access to devices and iPhones buys them some short-term peace and quiet in the evenings after a stressful day – but at a very high long-term price in terms of their children’s mental health.

My advice? Hold out for another year. There are many children in her peer group without phones, and not being part of the cool gang until she is 12 may be no bad thing.