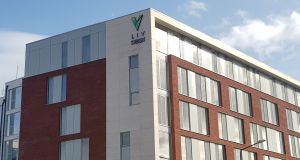 The LIV Student accommodation complex on Church Street in Dublin

Tenants in a student complex in the capital are facing rent increases of more than 10 per cent due to what the management company is calling an “administrative incident”.

Some 53 students in the LIV Student accommodation block on Church Street in Dublin signed contracts at the beginning of September that states rooms cost €270 per week.

The rooms, some of which have bunkbeds, are shared between two students, reducing the cost of rent to €135 per person.

However, the price quoted on the contract was for single occupancy, and not for shared rooms, the management of the complex said.

Simon Pollard, general manager of LIV accommodation in Dublin, said the situation has occurred as a result of “a genuine misunderstanding between a member of our team and a number of our valued students”.

Mr Pollard said the company discovered on the September 20th some of the rooms students had booked were now being occupied by two people at the rate of single occupancy.

There was only one signature on each of the lease agreements, management added.

“After discussions and realising the obvious misunderstanding that had occurred between the students and the member of staff involved it was decided to arrive at a fair and balanced compromise that was then put to all the students involved,” he said of the new prices.

He said that the new cost of rent “reflects a considerable saving on the published rate for the affected students”.

“My team and I are sorry that this situation has arisen and will ensure that there can be no repetition of this isolated and administrative incident occurring in the future,” Mr Pollard added.

Students have been told the new prices will apply from next months’ payment. Students who are not sharing a room are not facing any increases in the cost of rent.

One student from India affected by the issue said it is creating “huge stress” for him and that he will not be able to afford the increase.

“I just landed here [in Ireland]. They can’t expect me to pay that much, it’s just not possible,” he said. “I have exams, assignments, classes, and now I have to look for a room. I have college five days a week, there’s no time for me to try and view properties.”

The Department of Housing has advised the students to refer the case to the Residential Tenancies Board disputes-resolution process if they feel legislation is being breached.

“We recently changed the law relating to Student Specific Accommodation (SSA) to offer students greater protection. SSA is now under the remit of the Residential Tenancies Board,” a spokeswoman for the department said.