Minister urged to act in Irish-language dispute at Dundalk school 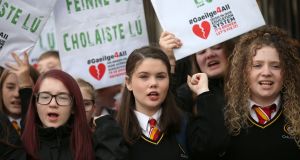 Minister for Education Joe McHugh is “acutely aware” of concerns raised around the provision of Irish medium education at an Irish language unit in a Dundalk school.

Students attending the unit, which is called Coláiste Lú, yesterday called on Mr McHugh to intervene in the dispute which centres around the provision of teachers by the larger English-medium host school, Coláiste Cú Chulainn.

A Department of Education spokesperson said the subjects and education provision in an Aonad is contingent on factors including support from management of the host school, the level of demand, the availability of school facilities and specialist teachers.

“School authorities should engage with the Department as required in relation to these matters,” the statement pointed out.

“If enrolment numbers and output from any gaelscoileanna in an area increase to a level which would warrant the transition to a stand-alone gaelcholáiste, the Department is open to considering a case from the school patron to transition from an Aonad to a gaelcholáiste.”

The statement added that Minister McHugh is “acutely aware” of the concerns being raised and has met representatives of the parents’ association to discuss the issue.

It said that he is ensuring officials in the Department “remain open” to engaging with the ETB and school authorities on the issue.

Coláiste Lú students and their parents were joined at their protest at Leinster House on Wednesday by students from a number of other Irish medium schools including Coláiste Íosagáin, Gael Choláiste Chill Dara, Gael Choláiste an Phiarsaigh and representatives of the Union of Students of Ireland (USI).

“It won’t be there by Christmas if something isn’t done,” said Aidan Kinsella who is a parent at Coláiste Lú.

Students said the reduction in Irish-medium provision has had an adverse impact on those preparing for exams as they have had to re-learn the syllabus through English.

“A lot of the key-words that we learned in first and second year were in Irish and it is really hard to translate them to English and we now have to learn everything in third year through English as well. We have a lot more work to do than the normal person who is doing the Junior Cert, ” said fourteen year old Éimear Kinsella.

“In all of my classes I am being taught through English - except for Irish. Up until this August, all of our classes were through Irish,” she added.