More than 64,000 students due to receive results, almost a month later than scheduled 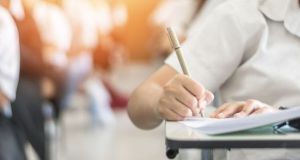 In ordinary level maths, a relatively high proportion of students - 6 per cent or more than 1,330 candidates – failed the exam. File image: Getty

One in ten Junior Cert students who sat the higher level history exam this year did not pass it, one of the highest fail rates for any subject.

On the plus side, history attracted a relatively high proportion of A grades compared to most other subjects.

The position of history in the curriculum has been in the news this week after Minister Joe McHugh moved to make the subject mandatory for all future junior cycle students.

In all, more than 64,000 Junior Cert pupils are to receive their results today, almost a month later than originally sch eduled.

Secondary schools are due to release results to students this morning. Students may also access results online from 4pm on the State Examinations Commission website (examinations.ie).

The delay has been due to the need to prioritise the provision of Leaving Cert results three weeks earlier than normal this year, as well as an unprecedented volume of rechecks.

A breakdown of grades shows a pattern of achievement that is broadly similar to last year.

This is linked to the so-called “bell-curve” marking scheme, which is used to ensure the proportion of students who secured grades is similar year-on-year.

Notwithstanding this, there is likely to be concern among educators and policy-makers over relatively high fail rates in higher level history and ordinary level languages.

The proportion of students scoring at or below an E grade ranged between 8-10 per cent in ordinary level French, German and Spanish, significantly higher than most other subjects. In ordinary level maths, a relatively high proportion – 6 per cent or more than 1,330 candidates – failed the exam.

English, science and business studies are marked under a new assessment and grading system which will be extended to other subjects over the coming years.

The introduction of junior cycle reforms means results for these subjects under the old grade format of As, Bs and Cs has been ended.

In another change, both science and business studies were sat this year at a new common level, with no higher or ordinary level exam. Next year, French, German, Spanish and Italian will also be examined at the new common level.

This is the final year that exams for these subjects have been sat at higher and ordinary levels.

In another change next year, there will be two new specifications (“teanga 1” and “teanga 2”) in Irish at higher and ordinary level.

The first is aimed at students learning through the medium of Irish, while the second is aimed at those in English-medium schools.

This is also the final year that Civic, Social & Political Education is being examined as it will no longer be examined as part of the State exams.

The overall numbers sitting the Junior Cert exam this year - 64,330 - is a 3 per cent increase on last year.

“The approach in the junior cycle is more engaging for young people and sets the ground for more creativity and critical thinking. It is nurturing minds and making sure young people are better equipped for deeper learning.”

The Teachers’ Union of Ireland urged all students to go on complete a Leaving Certificate programme.

“It is important to highlight that no two learners are identical and that access to alternative options such as the Leaving Cert Vocational and the Leaving Certificate Applied programmes should be expanded where required,” said TUI president Seamus Lahart.