State criticised over €10m spent on chaplains for schools 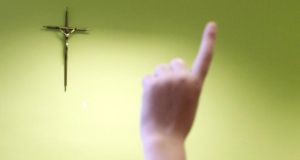 The practice has drawn criticism from campaigners who say this funding is not being spent in a transparent manner and discriminates against secular and minority faith parents.

The Department of Education has confirmed that it allocates Catholic or Church of Ireland chaplain posts to Education and Training Boards (ETB) secondary schools and colleges.

In all there are 156 full-time chaplain posts – mostly Catholic – allocated to these schools. The annual cost is approximately €9.8 million.

The appointment of chaplains to these schools flows from the original agreements concluded when the schools were first established.

A spokesman for the department said chaplains perform pastoral and counselling roles and play an important role in supporting student wellbeing.

However, Atheist Ireland said State-run secondary schools were meant to be an alternative to denominational schools, yet they are funding chaplains to help only Catholic and Church of Ireland parents with the religious education of their children.

“The Department of Education has told them to consult parents about whether they want religious instruction in accordance with these or other denominations, and the ETB schools are refusing to even consult with parents about this,” said Jane Donnelly, human rights officer of Atheist Ireland.

“If the schools do not know whether parents even want religious instruction and worship in accordance with the rites of these denominations, how can they justify paying chaplains to help these parents with the religious education of their children?”

The Dáil’s Public Accounts Committee is currently investigating the public funding of chaplains in third-level institutions.

It has asked the Higher Education Authority to show whether these posts are being openly advertised.

Atheist Ireland has formally requested that the committee extend its investigation to include the appointment of chaplains to secondary schools.

Education and Training Boards Ireland (ETBI), the representative body for ETBs, said it was not in a position to comment when contacted.

However, it has previously pointed out that the appointment of chaplains to some of its schools flows from legally binding agreements with the Catholic Church dating back to the 1970s.

These agreements oblige about a quarter of the 270 ETB-run secondary schools to maintain a Catholic ethos and provide students with two hours of religious instruction.

The spotlight on these arrangements come at a time when ETBI is finalising a “core values and characteristic spirit review” report, which highlights the challenge facing the sector in becoming more representative of the wider community.

The report says that, overall, ETB schools are inclusive and open to all pupils regardless of their background. But it notes that the sector has yet to clearly articulate its core values and ethos and this has resulted in schools being left “to form their own schools-specific values and traditions”.

It says that, in some cases, there is a confusion over whether ETB schools “are de jure multidenominational but de facto Catholic”.