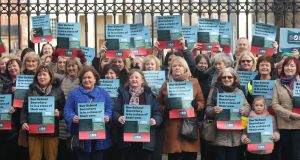 Members of the Fórsa school secretaries branch during the protest outside the Department of Education. Photograph: Damien Eagers/The Irish Times

School secretaries, some of whom say they are paid as little as €12,000 a year, are to hold a one-day strike on Friday, following a protest outside the Department of Education in Dublin on Saturday.

They are demanding an end to a two-tier system under which some are directly employed by and paid by the Department of Education and have public service employment status, while the majority have their pay and conditions determined by school management boards from the grant paid to their schools by the department.

Secretaries employed by the department are entitled to higher pay, holiday pay, sick leave and pension rights. However secretaries who are paid out of the school grants are paid “what the school can afford”, protesters said.

In instances where schools have more then one secretary, two workers doing the same job can be on different schemes, earning different rates of pay under different conditions of employment.

Trade union Fórsa is running a campaign for pay equality and according to branch secretary Liz Phelan, Minister for Education Joe McHugh accepted the workers’ case for equality in a Dáil speech last October. But she said the Fórsa members were subsequently offered a 1.5 per cent pay increase, which they said was demeaning.

Kathleen O’Doherty travelled to the protest from Letterkenny, Co Donegal because, she said, “we just want equal pay and conditions”.

“Some school secretaries are paid under the 78/79 scheme and those of us paid out of the school grant, we are just paid what the school can afford,” she said.

She added that many secretaries were left to draw unemployment benefit when the schools were closed for the summer break. “We are just seeking parity”.

Now the Fórsa members are planning a State-wide day of strike action on Friday next, January 10th. The move follows talks at the Workplace Relations Commission, which the union said had not come close to addressing the gap in employment status between the two groups of secretaries.

Friday’s strike will be followed by escalated and ongoing action under which school secretaries will withdraw from work on public service systems and databases. They will also refuse to carry out the functions of public servants.

A Fórsa spokesman said talks had been taking place since October on the two-tier pay system and “irregular, short-term contracts that force them to sign on during the summer holidays and other school breaks.”

The union’s head of education, Andy Pike, said the department had failed to bring forward any proposals on pay capable of resolving the issue: “The offer to school secretaries was 1.5 percent. An offer we can only describe as insulting”.