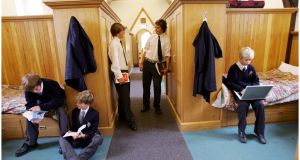 St Columba’s College in Dublin is the most expensive private school, with charges of €8,654 for day pupils and €23,952 a year for boarders. File photograph: Bryan O’Brien

Two out of three private schools in the State increased their fees this year by up to 10 per cent or more, with the most expensive schools now charging up to €8,600 a year for day pupils and more than €20,000 a year for boarding.

Latest enrolment figures show pupil numbers in the sector have rebounded to levels last seen during the economic boom.

An Irish Times survey shows the most expensive school for day pupils is St Columba’s College in Dublin 16, which charges €8,654 a year.

The warden of St Columba’s, Mark Boobbyer, said the school was “slightly” more expensive than others due to its smaller pupil-teacher ratios and the inclusion of school meals and evening study in charges for day pupils.

He said demand is growing for places among “gridlock” parents who want to be able to ensure their children can learn, study and take part in sport in a single place.

For boarders, the most expensive school in the State is also St Columba’s, which charges up to €23,952 for seven-day boarders.

In all, more than 30 of the 50 private schools have increased their fees this year by anywhere between 1 and 11 per cent.

Latest official enrolment statistics for the 2018-19 academic year show numbers attending private schools climbed to more than 25,600 pupils, up by almost 500 on the previous year.

Boarding and international schools report significant growth in demand from families based overseas or relocating to the Dublin area.

While schools say most demand is from American and European families working in the tech sector, they note rising interest from Asian countries such as China, India and Korea.

Nord Anglia, based in Leopardstown, is the most expensive international school and charges day pupil fees of up to €25,000.

It is aimed mainly at the children of mobile executives and teaches children the International Baccalaureate (IB) rather than the State curriculum.

The qualification is recognised worldwide and culminates in a two-year diploma, equivalent to the Leaving Cert.

The school is operated by a Hong Kong-based firm which runs international schools across the globe, and is backed by businessman Barry O’Callaghan’s firm Rise Global.

Competition in this sector is hotting up with the expansion of SEK Dublin, an international school based between Bray and Greystones, Co Wicklow.

The school is to grow from 100 pupils to 240 over the next five years and is targeting international families, as well as Irish families who want a different education experience for their children.

Chris Charleson, director of SEK International Schools, said: “Dublin is an international city with a vibrant and growing multinational community, many of whom are familiar with the International Baccalaureate and the opportunities it offers students.”