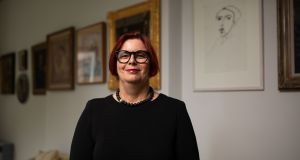 Prof Kerstin Mey, who was appointed interim president of University of Limerick earlier this year. She says it is possible for women ‘to knock at and shatter the glass ceiling’. Photograph: Sean Curtin/True Media

Earlier this year Prof Kerstin Mey shattered one of the highest and hardest glass ceilings there is in Ireland.

Her appointment as president of University of Limerick in July ended a 428-year tradition of men only running Irish universities.

By her own admission, the full significance of it only sank in later.

“I was really surprised when I was being stopped in Limerick, on the street or in the shops, by women who I had never met before who were congratulating me and saying how fantastic it is and how important it was… So, I didn’t fully appreciate how big a deal it was.”

Part of that, she thinks now, was down to wanting to avoid over-thinking the enormous responsibility of the position as a role model for women.

“The expectations are huge that as a woman you will do things differently, you will change things… it’s a very symbolic role, and you serve as a role model in your own institution and in the sector and beyond."

Prof Mey was born and raised in East Germany (what was then the German Democratic Republic).

Equality for women was rooted – officially, at least – in the doctrines of the eastern bloc state.

In reality, she says, it was a flawed model which relied on near full participation of women in employment to make up its low industrial productivity.

However, she says, being the first member of her family to obtain a PhD instilled a strong belief in her that it was “possible to knock at and shatter the glass ceiling”.

Ireland, she says, is not unusual with its huge under-representation of women at senior levels of academia.

Prof Mey says promotional pathways don’t always take account of women’s rounded experience; the socialisation of women and expectations in society may also lead to greater hesitation among women to put their head above the parapet.

“That needs to develop by bringing women into leadership training early on, and support them to realise their talent and aspirations,” she says.

She is a strong supporter of an initiative, spearheaded by previous minister for higher education Mary Mitchell O’Connor, which is resulting in the appointment of dozens of women-only professorships aimed at tackling gender inequality.

“It’s not about promoting women who haven’t got the capability to contribute to the positions. The process [for appointing women-only professors] is highly competitive, and there are many talented women around...”

Prof Mey is at the helm of UL at a time when the Covid-19 pandemic has changed the traditional college experience beyond recognition.

She accepts students are losing out by not having a campus experience and taking part in clubs and societies. They also have to contend with mental health pressures and patchy access to technology.

But, she says, positives may also emerge from the experience such as an ease with technology among graduates which will prepare them for a world where digital disruption will be a way of life.

It may also change the way learning takes place in future, she says, with a greater emphasis on blended learning, combining in-class with online learning.

Quite apart from gender, Prof May’s appointment is also unusual for her background in the arts and humanities.

Most college presidents are steeped in Stem (science, technology and engineering), where the most lucrative research funding is.

She studied for a master’s degree in art and German language and literature at Humboldt University in Berlin, followed by a PhD in art theory and aesthetics.

Arts, she says, will be integral to our economic success. The future of research and work will focus on the intersection of a range of different disciplines.

At a time when many say higher education faces a crossroads and there are questions over how it will be funded, Prof Mey is not a supporter of student loans or privatisation.

“I am of the view that education is a public good. So I would not speak for privatisation of tuition, tuition fees, but of continued State funding… “ she says.

Major changes will be needed, she says, in future. Higher education won’t stop at graduation; lifelong learning will become more of a reality for all.

“I think we have to think about that, look at what’s already there and look at the debates about allowances for every citizen towards a lifelong education.”