Trinity and Richard Dawkins: Better to debate ideas than to ban them 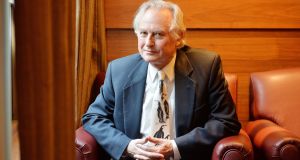 Scientist Richard Dawkins, photographed in Dublin in 2015. “... the Dawkins episode provides us with an opportunity to consider in general the issue of ‘deplatforming’, to borrow that ugly word from the growing lexicon associated with denying free speech”. File photograph: Alan Betson

The decision some weeks ago by Trinity College Dublin’s Historical Society (the Hist) to “disinvite” prominent scientist Prof Richard Dawkins from a scheduled address sparked considerable controversy across social media and other platforms.

It was not Trinity’s decision to invite Dawkins nor to withdraw that invitation. The board of the college had no role in either action. Whether I, as provost, agree with it or not is immaterial.

But I resist all calls to rebuke the Hist for denying freedom of speech. On the contrary, I support the society in exercising its autonomy. Student societies are independent and their only obligations are to conduct their affairs without contravening college regulations and to obey the law of the land.

Wouldn’t it be interesting to hear the Archbishop of Dublin vs Dawkins in a debate about God?

In fact, our desire to teach our graduates to think independently underpins our new undergraduate curriculum launched in recent weeks. We are offering our undergraduates more flexible pathways through their learning experience, precisely to promote independence of thought.

It’s important to clarify what happened in the case of the Hist.

While its decision did not necessarily reflect the viewpoints of many in the Trinity community, including those of some alumni, Dawkins had not been invited to the Hist for a debate. He was invited to give a speech and take a question-and-answer session afterwards. This is part of the issue and students have every right to say that they don’t want to be forced to listen to what someone has to say on an uncontested platform.

Still, the Dawkins episode provides us with an opportunity to consider in general the issue of “deplatforming”, to borrow that ugly word from the growing lexicon associated with denying free speech.

Would a better model have been to hold a debate in a debating society? Wouldn’t it be interesting to hear the Archbishop of Dublin vs Dawkins in a debate about God, for instance? Debate and dialogue are central to a university as a meeting place for the exchange of ideas.

Certainly even debates may cause discomfort, albeit a discomfort that may be worth enduring if we learn something. Would the discomfort of this debate be worth it: That this house believes Middle Eastern women need western feminism?

Apparently not as this debate was cancelled, perhaps rightly.

The cancellation of uncomfortable motions for debate and the deplatforming of controversial speakers are becoming more common occurrences. In the UK, Nigel Farage, the Brexiteer, David Willetts, the former UK higher education minister and Julie Bindel, the radical feminist, have been among those forced to abandon planned university appearances.

We should not rush too fast to judge these decisions. In a university, students are there to learn, and that process involves making mistakes at times. It is not easy for students to run societies in times when any decision can attract a vicious social media response. The students’ deplatforming decisions, whether we agree with them or not, reflect the harsh public environment in which we now live, one that is greatly different from the more tolerant times when people of my generation were students. It is very easy for those outside to talk about being brave – from their anonymous accounts.

Where do you draw the line when confronted with QAnon and other conspiracy theorists, anti-vaxxers or anti-maskers?

The defining legacy of this year’s Hist – and this goes for all the college societies – will be not so much this issue, but the manner in which its leadership copes with the challenges of adapting its events to the constraints posed by the Covid-19 pandemic.

If universities are to continue to be places to grow and learn, then students need to be empowered to take risks – and make mistakes – without drawing criticism from all sides.

Free speech, of course, is a very valued right in a democracy, but it is not an absolute right. Otherwise there would be no restraint on voicing slander, revealing official secrets, breaching copyright, uttering obscenities or inciting violence.

It is when it comes to espousing a “no free speech for racists/fascists” approach that things get a bit tricky. Where do you draw the line when confronted with QAnon and other conspiracy theorists, anti-vaxxers or anti-maskers? Is it not better to engage with them to try to persuade them of the wrongness of their views? If we do not, their beliefs may harden, leading to deeper divisions in society. How do we create universities where this can happen?

On the other hand, sometimes it’s impossible to allow planned events to proceed on campus because of the very real danger of violence. Two years ago, Trinity had little option but to cancel a talk by the then Israeli ambassador to Ireland Ze’ev Boker for that very reason. Of course, we uphold the right of students to protest but it was regrettable that he was not allowed to speak.

Both the diplomat and the scientist have views with which I might not agree, but I would prefer to debate with them than ban them. We should think twice before censoring ideas.

Oscar Wilde, one of the Hist’s many distinguished speakers, rightly wrote that “an idea that is not dangerous is unworthy of being called an idea at all”.