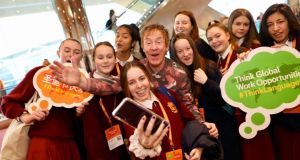 Secondary school students at the Languages Connect event at the Convention Centre in Dublin on Friday.

Secondary school students are being urged to boost their career prospects by studying foreign languages .

Some 3,000 students attended an event in Dublin’s Convention Centre aimed at highlighting the personal, social, professional and economic benefits of language learning.

While most Irish students study foreign languages in school, surveys show Irish adults lag behind other Europeans in language competence.

Karen Ruddock, director of Post Primary Languages Ireland, said the global dominance of English has given rise to the mistaken belief that “English is enough”.

This, she said, can result in complacency and a lack of motivation to learn other languages.

“Today’s event is about delivering a message that learning a foreign langauge will create more work opportunties, more chances to make friends and have great life experiences,” she said.

In a sign of the increasing demand for a multilingual workforce, the France Ireland Chamber of Commerce, French TV station, TV5Monde, and the European Parliament were some of those who too out stands at the event,

Third level colleges also showcased their courses in foreign languages as well as organisations that seek to offer opportunities to students for language exchange.

Julie Sinnamon, Enterprise Ireland chief executive, said: “In the context of Brexit, we have set an ambitious target in Enterprise Ireland to grow exports outside of the UK by 50 per cent by 2020 and if you want to be taken seriously in foreign countries, you really need to be able to speak the language”.

The IDA’s chief executive Mary Buckley said Ireland is competing with other locations around the world to win foreign direct investment.

“Many of those developed economies have people that can speak many languages and we have to compete in that space,” she said.

Orlaith Tunney of Trinity College Dublin’s career services, said students with a language can go in to a range of diverse areas from “writing to business to technical to diplomacy, international law, politics, there’s a whole range of possibilities, it’s just limitless”.

Under a 10-year Department of Education strategy, there are plans to oncrease in the number of students sitting two languages for state examinations by 25 per cent.

There is also an aim to increase the proportion of the higher education cohort studying a foreign language, in any capacity, as part of their course to 20 per cent.

Next year, a number of new languages will join the Leaving Cert curriculum in a bid to boost the “mother tongues” of students with Polish, Lithuanian, Portugese and Chinese.