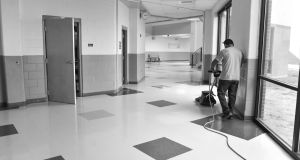 Schools may have to close facilities outside of school hours due to restrictions on hiring caretakers. Photograph: iStock

Schools may be forced to stop providing access to their facilities by local communities outside of school hours due to restrictions on hiring caretakers, an Oireachtas committee has heard.

The Association of Community and Comprehensive Schools, which represents 96 secondary schools, warned that austerity-era cuts to maintenance staff means that sports halls, pitches and other facilities cannot be kept to the required standard.

Paul Fiorentini, the association’s president, said a moratorium on recruitment introduced in 2009 which limits most of its schools to a single clerical officer and caretaker, was severely curtailing the quality of services in schools.

“The immediate is all that can be addressed and essential planned maintenance programmes are difficult if not impossible to implement,” he said.

“This is simply storing up potential problems which will ultimately require significant expenditure to correct.

He said adequate caretaking and cleaning personnel are essential to meet health and safety obligations.

“Many community and comprehensive schools provide access to facilities to their local communities outside of school time,” Mr Fiorentini said,

“This tradition will be potentially damaged due to the lack of availability of caretakers to open and maintain facilities.

While Mr Fiorentini welcomed a recent announcement that the moratorium will be relaxed for schools with 700 or more pupils, he said this was an “important first step” in the restoration of essential posts.

The Joint Oireachtas Committee on Education heard on Tuesday from a number of groups who expressed concern over the treatment of non-teaching staff in schools.

The trade union Fórsa said lack of public service status for the vast majority of school secretaries and caretakers was resulting in “low pay, precarious insecure employment, lack of pension provision, lack of sick pay and no holiday pay”.

Andy Pike, the union’s national secretary, said these staff are required to sign on during the summer months, without access to occupational sick pay, pensions or job security.

Many of these problems could be resolved by transferring these posts onto public service conditions of employment, he said.

“As a group they have been taken for granted, undervalued and ignored both within the schools sector and the political world for far too long,” he said.

The Department of Education has estimated that while it could cost more than €40 million a year to do this, once pension costs are factored in.

It said the majority of primary and secondary schools receive grant assistance to provide for caretaking and secretarial services.

This model enables the support to be spread more widely, and ultimately cover all primary and secondary schools with funding for such services, according to the department.

It said that within the grant schemes, the level and extent of services provided is a matter for the school authorities who apply “diverse arrangements for secretarial and caretaking services as resources permit and as their local needs mandate”.

The department has noted that a minimum hourly rate of €13 per hour has been phased in over recent years, on foot of an arbitration process at the Workplace Relations Commission.