Knights of the Campanile group claim exoneration over ‘hazing’ allegations 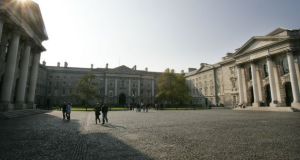 A member of the Knights of the Campanile present in the apartment at the time told The Irish Times that new members had been told to eat butter, strap bicycle helmets on their heads, and at another point had to get into a running shower with an umbrella. File photograph: Alan Betson

The all-male Trinity College Dublin society at the centre of an alleged ‘hazing’ controversy, has claimed a college investigation has concluded only that an “unauthorised party” took place.

The investigation was into the behaviour of The Knights of the Campanile, during an initiation ceremony for new members, held in the student residence of the society’s president, Ben Arrowsmith, in late February.

In a statement, The Knights of the Campanile said the investigation by the college junior dean had now finished, and quoted him as stating: “I have found only that an unauthorised party was convened in your apartment on 27th February.”

In response, a TCD spokesman said it was “not college policy to comment on the outcome of disciplinary decisions”.

“That is a matter for the junior dean and those concerned.”

The investigation into allegations of hazing had followed a report on the events of the night by the University Times (UT) last month.

A member of the Knights of the Campanile present in the apartment at the time told The Irish Times that new members had been told to eat butter, strap bicycle helmets on their heads, and at another point had to get into a running shower with an umbrella.

In a statement on Thursday, master of the society Peter Ledbetter, a business executive and former college tennis player, said “so there you have it: the student Knights had a party”.

Mr Ledbetter said recent weeks had been “distressing for the student Knights, and particularly president Ben Arrowsmith”, to have been the subject of “irresponsible and sensationalist claims of ‘hazing’”.

Hazing, more common in American colleges, is where members of a club or group are pressured to perform tasks intended to cause embarrassment or ridicule, which risks emotional or physical harm.

Mr Arrowsmith had accepted that an unauthorised party had taken place, and “apologised to the junior dean for his indiscretion”, the statement said.

Mr Ledbetter said it “remains to be seen if the University Times will take responsibility for its actions”, claiming the investigation had found “their wild claims lacking foundation”.

The Knights of the Campanile was set up in 1926 to host visiting sports clubs. The invite-only society accepts 50 new inductees each year based on their sporting prowess, and boasts 1,200 members, including honorary members.

TCD is also investigating an allegation that the UT “bugged” the apartment of Mr Arrowsmith during the initiation ceremony. Reporters from the newspaper placed a recording device by the open door of the apartment, after following the group to the student residence.

On foot of the story, more than 500 students signed a petition which has led to a referendum, which could result in the effective closure of the newspaper, by dramatically reducing the funding it receives from TCD students’ union. Voting in the campus referendum will take place next week.

Editor of the UT, Eleanor O’Mahony has rejected accusations of bugging, and the National Union of Journalists has defended the reporting as “consistent with the highest professional standards of public interest, investigative journalism”.