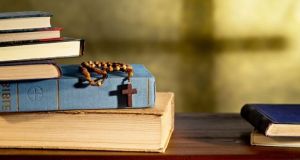 At St Oliver Plunkett’s School in Malahide, the parents’ association warned that the loss of the school’s religious ethos could lead to the cancellation of nativity plays and carol services. File photograph: Thinkstock

Parents in north county Dublin have been warned that a vote to remove the Catholic ethos of a local primary school could lead to a “Brexit-type disaster” for future generations of children.

The Department of Education has requested that one Catholic school of eight in the Malahide - Portmarnock - Kinsealy area of the county divest its Catholic patronage.

The move is part of a wider plan to increase access to multi-denominational schools on the basis that 90 per cent of schools are under Catholic patronage.

However, parents who are being invited to vote on whether to divest their school patronage this month have been warned of the “huge” consequences changing the ethos of their schools.

In the case of St Oliver Plunkett’s School in Malahide, the parents’ association warned that the loss of the school’s religious ethos could lead to the cancellation of nativity plays and carol services, and would impact on the “spirit, culture and even the name of the school”.

It also warned that initiatives such as the school’s garden fete; Healthy Eating; the Junior Entrepreneur Project and Book Buzz, a school reading programme, might not be facilitated under a new patron.

The message calls on parents to attend meetings to voice their concerns and warns of the dangers of a narrow vote in favour of divestment.

“To avoid another Brexit-type disaster, we implore you to attend the meeting. This is your opportunity to raise your questions/concerns,” parents were told, in messages seen by The Irish Times .

A separate letter from the school’s board of management states that staff and the board are “100 per cent” in favour of remaining and warned that a change in patronage would have “huge implications”.

“A change in patronage would mean that First Penance, First Holy Communion and Confirmation would no longer be the responsibility of the school. Therefore, should you wish your child to receive the Sacraments, all preparation would take place outside of school hours and at a cost to parents, ” the letter states.

“A change in patronage would impact the day to day running and management of the school, particularly in terms of managing finance, recruitment, allocation of resources.”

A number of other Catholic schools in the area have issued similar warnings that a change in patron could mean an end to the celebration of religious days and sacraments. Letters from at least two individual schools carry identical language.

Opposition to divestment has prompted anger from some parents, who are in favour of greater choice and say there is a co-ordinated campaign to halt divestment.

One local parent, who declined to be named, said schools have presented the opportunity to vote as “an assault on all that is good about the school community”.

“They have conducted a campaign to incite fear, uncertainty and doubt among parents, making claims that switching to an unknown patron would result in the removal of book clubs, garden fetes, and Christmas celebrations...

“Allowing schools this much control over the process means that it will be almost impossible for change to happen.”

Educate Together, meanwhile, has rejected local claims that non- or multi-denominational schools would not mark religious occasions such as Christmas or Easter if they are divested.

In a statement, the school management body said many Educate Together schools host “inclusive celebrations” such as annual festivals of lights and winter fairs that incorporate elements of Christmas, Hanukkah and the winter solstice.

“Christmas is, of course, marked in Educate Together schools nationwide; just as our schools endeavour mark Diwali, Eid, Vaisakhi and other religious festivals throughout the school term,” it said.

The Department of Education-commissioned survey of preschools in the areas indicates that a total of 26 per cent of parents were in favour of a choice of school patron in the area.

The Government has pledged to deliver at least 400 multi-denominational schools with the next decade, through a combination of new schools and divesting existing schools.