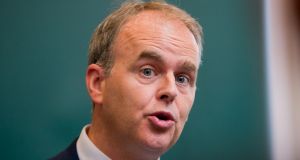 Minister for Education Joe McHugh: under new regulations parents may only apply for a place in a school in the year prior to admission. Photograph: Gareth Chaney/Collins.

Schools will have five years to phase out waiting lists for children under new admissions legislation which comes into force from September 2021.

Parents may only apply for a place in a school in the year prior to admission.

The move means parents who have put down their children’s names years in advance for highly-popular secondary schools will no longer be guaranteed a place.

While the phasing out of waiting lists affects all schools, it will be much less of an issue at primary level due to the five-year lead-in time.

In addition, under new measures, schools will be prohibited by law from asking parents during enrolment about whether their children have disabilities from 2021 onwards.

Instead, schools will be required by law to accept all applicants where they have spare places.

To give effect to these changes, Minister for Education Joe McHugh has signed a commencement order providing for the new laws to come into effect for the 2021/2022 school year.

He said this will provide time for schools to start putting in place their arrangements for the new framework, including new admissions policies.

“This means that, from February 1st, 2020, boards of management will have three months to prepare a draft admission policy having first consulted with the patron, parents of students attending the school and staff of the school,” he said.

While there are plans to limit schools from setting aside no more than 25 per cent of places for children of past pupils, Mr McHugh’s statement did not refer to this measure. A spokesman for the Minister was not in a position to confirm the status of this planned measure at the time of writing.

The reforms are part of series of changes aimed at making admissions fairer and more transparent for children and parents.

However, the measure prohibiting schools from asking about pupils’ special needs has drawn criticism from schools and teachers who argue that this information is crucial in determining whether they have the expertise or capacity to cater to the needs of children.

Among the other key changes in the revised school admission polices are that: – All schools must consult with and inform parents where changes are being made to their admissions policies.

– School’s must provide information on arrangements in respect of students where the parent, or the student if they are 18 or over, has requested that the student attend the school without attending religious instruction.