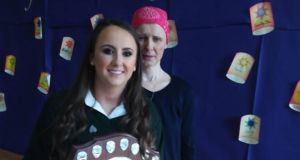 Student Rhona Butler had to sit a Leaving Cert exam the day after her mother, Margaret, died. Photograph: Courtesy of Rhona Butler

The State Examination Commission (SEC) mission statement says it is dedicated to providing a “high quality examinations and assessment system incorporating the highest standards of openness, fairness and accountability”.

However, internal records which show the existence of a parallel Leaving Cert certification process – based on estimated grades – are likely to raise fresh concerns over the fairness of the system.

Hundreds of Junior and Leaving Cert students have in recent years been awarded grades based on estimates by their schools due to errors such as lost scripts or candidates being given the wrong exam papers.

There are very valid reasons for many of these awards, where students were disadvantaged through no fault of their own. However, a detailed breakdown of cases where these expected grades were awarded raises questions over whether they are being fairly applied in all cases.

In one case, a student was given an estimated grade after complaining of being distracted by ants on their desk while sitting a Leaving Cert exam.

In other cases, estimated grades were awarded after students complained of noise outside exam centres, a stopped clock in an exam hall, not being given rest breaks or being distracted by other candidates.

The fact that this process is not publicly acknowledged or referred to in any published documents raises further questions over the transparency of this process.

In addition, the treatment of students granted estimated grades contrasts sharply with that of bereaved students.

A student whose close family member died had two options up until last year: sit Leaving Cert exams within hours of the funeral; or re-sit their exams a year later. Under changes introduced last year, these students can now, thankfully, sit exams they missed in July.

However, even with these changes, bereaved students are still requested to undertake an exam, unlike those who receive estimated grades.

Rhona Butler, a Tipperary student who who lost her mother during the Leaving Cert exam in 2018, was instrumental in prompting this change.

She spoke last year of having to sit her business exam the day after her mother died or risk repeating the Leaving Cert the following year.

When contacted about the existence of these estimated grades this week, she said the practice seemed unfair given what bereaved students are expected to do.

“I was shocked when I heard that this was in place: you have to question what are legitimate reasons for awarding these grades,” she said,

“It boils down to fairness. It was the main reason I spoke about my experiences. I wanted to be treated fairly... I think if a student feels they have a cause for complaint, they should also have to resit the exam. It’s about treating everybody the same.”

Internal records show the SEC considered providing estimated grades – or “assessed results” as it calls them – for bereaved students, but ruled it out over fears it could undermine confidence in the Leaving Cert.

The record did not reference that such a system already exists – and the numbers receiving these estimated grades in a given year are significantly more than the number of bereaved students.

In light of the SEC’s own comments, it begs an obvious question: will the existence of this system now threaten public confidence in the Leaving Cert exam system?