Why Confirmation is still ‘a thing’ in Irish schools

In a slowly secularising school system, the numbers getting confirmed are holding up 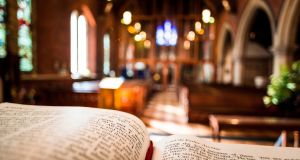 Mass attendance has plummeted. Fewer people than ever are self-identifying as Catholic. And the public has voted in significant numbers to remove religious dogma from our laws.

Yet, tens of thousands of children have still prepared for their “big day” this spring, even though many Confirmations across the country have now been postponed by the coronavirus lockdown.

Latest official figures show the number of children getting confirmed in the Archdiocese of Dublin is, broadly, holding steady. In fact, numbers increased from just under 15,000 to almost 17,000 between 2017 and 2018.

So, what is going on exactly? Are culturally Catholic families reluctant to give up on traditional milestone events in their children’s lives? Or are these figures just a symptom of the fact that 90 per cent of schools are still under Catholic control?

Holy Cross National School in Dundrum in south Dublin is like many of the 90 per cent of Catholic primary schools in the country: the vast majority of its pupils this year are taking part in Communion and Confirmation.

Ultan MacMathuna, the school principal, estimates that about 80 per cent of the pupils are due to take part in sacramental preparation this year.

“The remaining 20 per cent are mostly pupils from different religious backgrounds or do not have a faith,” he says. “Other than that, thing are still quite traditional. There is no big shift away it.”

As a Catholic school, sacramental preparation forms part of the school day and many hours are spent ensuring children are prepared for the event.

At an inner-city Catholic primary school, it is a similar picture. The school principal – who declines to be named – says numbers taking part in the sacrament are as high as ever.

“Most of the churches around here are quite empty, but Communion and Confirmation is still a very big deal,” the principal says. “ It’s very much about the occasion and a rite of passage. Parents might not have much time for the church or go to Mass, but they see this as a big milestone.”

Another teacher at a Catholic school, who declines to be named, feels that many are doing it simply because “everyone else is doing it” and it is expected of children.

“I think parents, even if they are not mass-goers or believers, want their children to fit in,” the teacher says. “It’s easier to go along with it, By opting out, their child misses out on the big day.”

At Belmayne Educate Together National School in north Dublin, a multidenominational school, there is no sacramental preparation during the school day.

Instead, families who want their children to have Communion or Confirmation must opt-in and pay extra for a special religious class outside school hours.

Despite this, school principal Sinead O’Meara estimates that most of the pupils from Catholic families – between 30 and 40 per cent in a single class – are opting in to these classes.

She says she senses a strong cultural Catholicism among pupils and parents, even if the families are not regular mass-goers.

“If parents have been to a Catholic school or if there is pressure from grandparents, many decide to opt their children into the class. It is a big family event and they don’t want to miss out on it. And, of course, it’s a big thing with girls and the white dress . . . ”

She notes, however, that a significant proportion of these children – about a third – end up opting out of Confirmation.

“I think it’s because they are learning about democracy and rights, and they may pick up that their parents are not practising. So, they feel, ‘well if you don’t believe, why should I’,” says O’Meara.

These factors have led to growing alarm with the Catholic Church over what many regard as the diminishing of school-led sacraments.

While the numbers are healthy on the face of it, there is a recognition that the foundations of children’s faith is weaker than ever and that religious events have turned into largely social occasions.

With fewer parents who are practising Catholics, teachers and the clergy have reported that children no longer have the basic levels of religious knowledge that used to be taken for granted, such as knowing when to sit or kneel at Mass.

That’s is why the Dublin Archdiocese is moving to change the way children are prepared for the sacraments.

Late year, Archbishop Diarmuid Martin of Dublin announced significant changes by taking responsibility for sacramental preparation out of schools. Instead, parishes will take over the preparation and will involve parents directly in the process.

In his letter to priests and parishes, Archbishop Martin said the proposal is “not something that will be accomplished overnight; it cannot however be put forever on the long finger. We must begin now”.

Donal Harrington, catechetics co-ordinator at the Dublin Diocese, is playing a key role in helping to shape what this new system will look like.

He says that while details are still being worked on, sacramental preparation in the parish will be on an “opt-in” basis. This, he says, will lead to a reduction in numbers.

The ceremonies are also likely to be much smaller; instead of a big school-organised Mass on a Saturday, the sacraments will be spread out over the course of a number of Sunday Masses, making it less of a “huge show”.

“The idea is that you no will longer make your First Communion just because you’re in second class. In future, people will make a request to the parish and follow a parish programme that will be put in place,” he says.

“It’s fairly automatic at the moment and many are not able to opt out. It can take a lot to opt out when so many other children are having a big day and everything.”

Most anticipate that the numbers will fall, he says, though it is hard to say by how much.

“There will be a reduction in numbers. The people who come along are more likely to be interested and engaged,” he says.

The details of what kind of sacramental preparation parents and their children will opt-in to are still being examined. However, it won’t be a simple after-school class.

This, he says, would simply replicate what is happening at present – and there is a consensus that it isn’t working. It is more likely will be a programme based on supporting parents in the home, giving them resources and attending parish events.

“We want it to be very family-friendly. We don’t want to excluded anyone . . . but if we want to change anything, we know it will have to different, ” he says. At present, the diocese is sketching out how it might work and consulting with priests, parents and others. You want their buy-in and for them to be enthused about this.”

There are also existing programmes in place in some parishes which are aimed at boosting parental involvement around the sacraments.

For example, Do This In Memory Of Me is a programme where parents are invited to attend Mass regularly with their children, with special Masses held on a monthly basis over a nine-month period in the lead-up to Communion.

One option under consideration for Confirmation, he says, is moving the age at which children prepare for the sacrament. In some other countries, children are teenagers by the time they are confirmed, giving them a greater sense of say in the process.

“There is a debate about whether sixth class really is the best time. There is a sense that it is not working and maybe we could delay it to teenage years . . . There is no right age for Confirmation, people have different views – it’s a sacrament in search of meaning and there is no strong consensus on it.”

Ultimately, he says, any decision will be made by consensus approach in consultation with priest, parents and schools.

If sacramental preparation is now on the way out of schools, it will inevitably raise wider questions around the place of faith formation or religious instruction during the school day.

At present, schools are entitled to set aside up to 30 minutes of the school day for religious instruction. Critics point out that this is twice the amount of time devoted to subjects such as physical education.

The wording of the archbishop’s announcement says the new approach “advocates a renewed relationship with Catholic schools in promoting Catholic ethos and in delivering the Grow in Love programme”. This means faith formation will continue during school – though the emphasis on the sacraments will reduce.

Overall, Harrington says, schools are positive about the move. “In some schools where there is a committed principal, there might be a sense of nostalgia of what we’ re losing – and a fear that if you take out the sacrament, do you then lose something? . . . But for teachers in national schools who are interested in faith, they have seen that it has decreased a lot. So, they feel, what we are doing makes sense.”