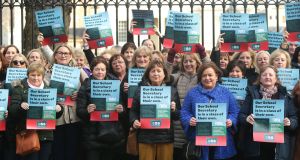 Members of Fórsa’s school secretaries branch protesting outside the Department of Education earlier this year. The union has deferred plans for fresh industrial action. Photograph: Damien Eagers / The Irish Times

Plans for a series of work stoppages by school secretaries have been put on hold to allow for fresh talks aimed at ending a dispute over their employment status and working conditions.

School secretaries had planned to hold three one-day work stoppages on Friday October 23rd, Monday, November 2nd and Friday, November 13th. This was due to be followed by an indefinite strike commencing from Monday November 16th.

Fórsa, the main trade union which represents school secretaries, said on Thursday that it had accepted an invitation from the Workplace Relations Commission (WRC) to attend fresh talks with the Department of Education later this month.

Fórsa’s head of education Andy Pike said the invitation to talks followed the intervention of Tánaiste Leo Varadkar last week when he committed the Government to the regularisation of pay, conditions and pensions of secretaries and caretakers.

Mr Pike said the union has agreed to defer its planned industrial action in order to ensure the talks have the best possible chance of success.

Mr Pike added: “We thank the WRC for intervening in this dispute. All parties now recognise that Government policy on this issue has shifted hence the need for more discussions, we hope to see this reflected in the approach taken by negotiators from the department.

“School secretaries and caretakers will rightly expect Mr Varadkar’s commitments to be followed up with concrete measures to satisfactorily address their pay, conditions and pension provision.”

It argues that a long standing two-tier pay system leaves most school secretaries earning just €12,500 a year, with irregular, short-term contracts that force them to sign on during the summer holidays and other school breaks.

“Very often the school secretary is the first person you meet on the way in to a school, and the caretaker is the last person to leave in the evening,” he said.

“Schools would not operate without them, and I think that the role they play in our education system is as important as that played by school teachers, SNAs (special needs assistants) and school principals.

“For that reason, it is the objective of this Government to regularise their employment, their terms and conditions and their pension rights as well. But that can only be done going forward, it can’t be done retrospectively.”