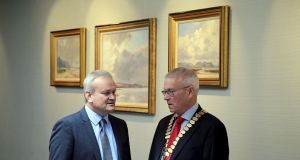 Kieran Christie, general secretary, and Ger Curtin, president, at Saturday’s central executive meeting of ASTI which recommended to its members that they should reject the public service pay agreement. Photograph: Nick Bradshaw

The prospect of further industrial action in schools later in the year will be determined by a number of key events over the coming weeks which will be watched very closely by the Government as well as tens of thousands of parents and students.

In essence teachers will have to decide whether they should row in with what more than likely will be the majority decision of the public service trade union movement to back the proposed new public service pay deal or else to fight to try to achieve something better.

The vast bulk of public service personnel will receive pay improvements of between 6.2 per cent and 7.4 per cent over the next three years under the draft accord which was negotiated last June.

However teaching unions have argued that the agreement did not sufficiently address their concerns about the two-tier pay structure which sees staff recruited after 2011 paid less than their counterparts taken on before then.

In June primary school teachers who were members of the INTO union voted to reject the proposed deal.

A ballot of members of the Teachers’ Union of Ireland (TUI) on the draft agreement is scheduled to be counted by the end of the coming week. TUI members will also vote on whether they would be prepared to take a range of industrial action on a number of issues including pay equality.

Critics of the deal

On Saturday the central executive of the second level teachers’ union ASTI decided to recommend to its members that they also should reject the proposed accord in a forthcoming ballot.

For critics of the deal in the education sector, this holds out the prospect of a joint teaching union front against the proposed Lansdowne Road II agreement.

However even before members of the ASTI vote, the proposed new deal is likely to have been ratified formally by the broader public service trade union movement.

Under the rules of the Irish Congress of Trade Unions (Ictu) such determinations are made by an aggregate vote of affiliated unions.

Each union is given a “weight” based on its membership size and as a number of the larger unions such as Siptu and Impact have already backed the deal, ratification is expected to be agreed when the Ictu public services committee meets on September 18th.

The Asti ballot is not likely to be completed until October.

The proposed new deal provides for an assessment of the pay equality issue over 12 months. However the Government has argued that ending the two-tier system would cost €70 million in the education and training sector and more than €200 million across the entire public service.

If the Asti and TUI join with their primary school colleagues in rejecting the deal, it would leave the teacher unions with a choice of either accepting the majority decision of the public services committee of Ictu or trying to fight on alone.

The INTO executive has not made a decision on whether it would be bound by the majority view.

The TUI has told its members that its long-standing policy is that it will not be bound by the aggregate vote of Ictu-affiliated union in matter affecting terms and conditions.

“The TUI will, as it has previously done, make a sovereign decision in respect of whether or not to consider itself covered by the agreement if it is accepted by an aggregate vote of affiliated union of the public services committee.”

Certainly any campaign involving all three teacher unions would present a stronger challenge to the Government than the industrial action strategy pursued by the Asti on its own over the last year, which resulted in school closures for several days last autumn, but which ultimately proved unsuccessful.

In voting to stay outside the proposed new deal, teachers would stand to lose the increases set out in its provisions.

However the Government could wield a bigger stick if teachers embarked on any action perceived by Ministers to constitute a repudiation of the public service agreement.

The Government invoked financial emergency legislation to penalise Asti members by, for example, withholding annual increments when the union was deemed to have repudiated the original Lansdowne Road accord last year.

The Government has not publicly stated that it would adopt similar measures in future but the legislative provisions remain in place for it to do so.