The results are in: how did our diarists do? 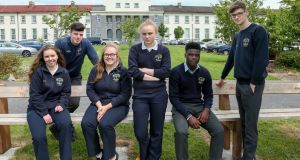 The last two years have been a long slog for the thousands of Leaving Cert students who picked up their results earlier this month. But for most of our diarists, at least, the summer wasn’t a time to dwell and worry; instead, they put all thoughts of the results out of their heads to focus on work, travel and simply getting some much needed downtime.

Muireann O’Reilly, one of six diarists at Coláiste Éinde in Salthill, Galway, has been working extremely hard over the last two years. That’s why, she says, she was happy to take time out and simply enjoy the summer. There was no work, no trips abroad and no major stresses. As her results would show, she had definitely earned the break. On the big day, her mum waited in the car while she went in to pick up the envelope.

Her classmate, budding artist Lauren Conway, spent the summer working in a coffee shop. “I learned a lot about coffee, and I saved up money for college. I went out whenever I had a chance, and I took part in an art exhibition where I sold four of my six paintings, including one to a big-name artist who invited me to his studio. I didn’t get to go away as I have been saving for college.” Lauren’s twin sister, who attends Salerno, a neighbouring girls school, picked her results up on the same morning, and the sisters decided to get their results at the same time, starting in Salerno. When it came to her results, she took the envelope and went into the bathroom to open them alone.

Ciara Kilbane also worked in a local coffee shop, and she also went on a Leaving Cert holiday to a music festival in Spain with four other friends. “The exams had dragged out a little towards the end, and I was very when it was all over. After that, I forgot all about them - until about a week before the results. On the morning, I wanted to go in by myself but my mum, who is a teacher in my school, was just down the hall in her office; she knew my results and was dying to tell me, but I wouldn’t let her. I got my envelope and took it to the quietest place I could find - the school chapel.”

Tom Crumlish finished the Leaving Cert and then immediately began a summer job as a box office assistant at the Galway Arts Festival. In between, there was a lot of Gaelic football and a lot of time spent with friends. He flew out to Budapest for a music festival on August 7 and returned in the afternoon on August 16, several hours after his friends had already picked up the results. “We left the campsite at 3am and at 3.30pm, my mum picked me up off the bus in Galway, with my results in her hand.”

Evan Murphy’s summer also involved a lot of Gaelic football, although that wound down when the Galway minors lost a recent quarter-final match. To earn money, he worked on a construction site for the summer. “On the morning of the results, I wandered in by myself and met a few friends there.”

Osas Aghabueze-Ayo didn’t work during the summer, and focused in on playing Gaelic football and spending time with his classmates. “Once the exams were done, I didn’t really give them a second thought, but as results day came closer, they started to creep back into my mind. I went in to school with my mum.”

So, were the diarists happy with the results? Muireann was delighted, picking up H1 grades in German, geography, biology and Irish and scoring 590 points, just 10 shy of an the maximum possible score. “I had hoped to get top marks in the languages, but was surprised that I did so well in biology. I had hoped to pick up more than a H3 in chemistry, but it didn’t affect my points and I was very happy with how I got on. I got my first choice CAO course, biomedical science at NUI Galway. And I am really looking forward to college.”

Lauren Conway had already been accepted into both the National College of Art and Design and the Institute of Art, Design and Technology Dun Laoghaire based on her portfolio, but she needed 300 CAO points and a pass in maths. “At first I wasn’t completely sure what the grades meant on account of the new system [which has replaced A1s, B2s, C3s and so on with 1’s, 2’s and 3’s right down to 8’s] but I figured it out quite quick. I was really, really happy with my H1 in art, for which I got 100 points, and I also got a H2 in English - although if I’m honest I had hoped for the H1. I would have liked to do better in biology. But overall I was happy and relieved and am excited about starting in IADT.”

Ciara Kilbane was “delighted” when she opened up the envelope. “I got a H2 in home economics and another in Irish and my overall points score was 478, which I feel proud of. A few months ago, I found out that my preferred course - gastronomic science in GMIT - had been dropped due a lack of interest, so I switched to commerce and I have more than enough points.”

When Tom’s mum handed him that envelope, he opened it cautiously and with a fast-beating heart, but the letters on the page immediately broke the tension. Tom picked up a total of 532 points with a H1 in accounting, which surprised him. “I would have liked to do better in English but it didn’t affect my points, so I can’t complain. I got a few H2s and I picked up 25 bonus points for maths. I think I am clear for the course I would like to do, unless it jumps up by more than 30 points.” He’s now heading for a global commerce in NUI Galway.

Evan Murphy had the points he wants for his course in commerce at NUI Galway but he admits that he is slightly disappointed because he didn’t achieve the grades he had aimed for. “I wouldn’t say I was particularly happy with any of my grades, but looking back I think it was probably fair. That said, I am considering appealing English and accounting.”

Osas Aghabue-Ayo’s mother stood beside him as he opened the envelope. “I wasn’t happy with my results,” he says. “It closed the door to biopharma in GMIT. I was a bit shocked. I felt I had worked hard, especially in biology, but I just didn’t get the results I wanted. It was frustrating. That said I was fairly happy with my grades in Irish, maths and French. I was in such bad humour that day that I didn’t go out that night, but after I spoke to my parents they gave me some alternatives for what I could do next, and their support meant so much to me. So I have been looking at access courses in NUI Galway or maybe building up points through the Galway Technical Institute. It is reassuring to know that I have other options.”