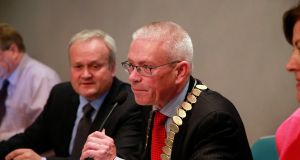 Members of the Association of Secondary Teachers in Ireland (Asti) will be balloted on the Public Service Stability Agreement 2018-2020 in the coming weeks.

Meeting on Saturday, the 180 members of the union’s executive council said one of the key failures of the agreement was that “it does not resolve the issue of equal pay for recently qualified teachers”.

The deal, which has been backed by Siptu and other large unions, is likely to pass regardless of which way the secondary teachers vote.

Asti’s standing committee had already recommended rejection of the agreement over the issue of lower pay for those recruited since 2012.

The decision by the executive council in favour of a No vote passed by a small margin, 63 votes to 59.

Asti president Ger Curtin said the proposed public service agreement does not achieve equal pay during its lifetime and this was the main reason members were being urged to reject it.

Members of the Irish National Teachers’ Organisation has rejected the deal, while the Teachers Union of Ireland is currently balloting.

The Asti opposed the previous Lansdowne Road Agreement for two years, and took industrial action that closed schools, but eventually signed up earlier this year. Increments and other payments that were withheld from members were then restored.