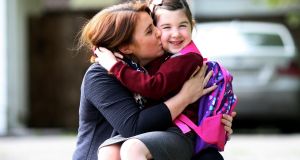 When five-year-old Isobel Cullinan starts school this Friday, her mother Laura will linger in the car park at St Mary’s primary school in Strokestown, Co Roscommon, longer than most parents as she conquers her anxiety – and joy.

“I have to say, there was definitely a time when I never thought we would see it. I’m terrified of letting her go but it’s fantastic. To have survived and to be here is fantastic,” said the Co Roscommon mother. Isobel is cancer-free. That’s a miracle as far as Laura O’Rourke Cullinan and her husband John Cullinan are concerned.

They will watch with relief and anxiety as their second-born trots in the school door alongside her older sister Charlie (9).

Isobel is a survivor of not one but two bouts of cancer, and the proud owner of a pet rabbit called Freddie, named after the long-removed central line which gave easy access to her veins during treatment.

In a nice piece of serendipity her first day at school coincides with the start of Childhood Cancer Awareness month, something her mother, a director of the Childhood Cancer Foundation, is keen to point out.

Izzy, as her family calls her, was 21-months-old when she was diagnosed with a cancer of the kidneys knows as Wilms tumour. Because it was caught at stage one, Laura said she and John, a former Meath county footballer , were absolutely blessed. “Winning the Lotto would not be as good as the news that she was stage one.”

The little girl had eight weeks of chemotherapy and had her kidney removed. Four months on from the diagnosis the family was told that she was cancer-free. “You are always worried that it will come back again,” said Laura.

Sadly it did come back, and two weeks after her third birthday two tumors were diagnosed on Isobel’s lungs. Doctors said her chances or surviving were 50:50.

“I can honestly say I wondered if we would ever get to this day,” said Laura as Isobel proudly models the school uniform, the school bag ready and waiting in the hall for weeks now. The treatment regime was more harsh second time round, and after seven months of chemotherapy and 16 doses of radiation the news was not good.

“When she was scanned, and we were hoping that everything was done and dusted, she still had the tumours.”

A week before Christmas, on December 18th, 2015, Isobel had part of her left lung removed during surgery which lasted 7½ hours. St John’s ward at Our Lady’s Children’s Hospital in Crumlin, has, according to Laura, become like a second home for herself and Isobel.

But that year they were very happy to be discharged at 5.30pm on Christmas Eve, and to be back in Bumlin, Strokestown, with John and sisters Charlie and Alexia before Santa found his way there.

The biggest gift was that doctors had told Laura they were confident that they had got all the cancer, and in April 2016 Isobel was deemed cancer-free.

Scans are now being scheduled every four months, rather than two months, another big milestone for Isobel, but each one is a worry.

“For a few days before a scan you just don’t want to talk to anyone,” says Laura.

But talking is something she is willing to do, and she hopes her daughter’s story will be a solace for other families enduring the terror of a childhood illness.

“Unfortunately a number of kids who relapse do not get to the other side, but we have got there and I hope that gives parents the solace to believe that they can get there.

“When Izzy was first diagnosed childhood cancer was one of those topics people did not talk about. There are a lot of after-effects, and families need a lot of support.”