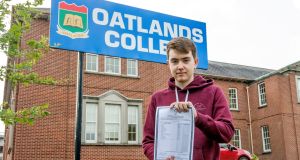 A Dublin student is hoping to have his Leaving Cert record amended after it emerged he was only awarded a H3 in mathematics despite scoring 99 per cent in the higher level exam he sat last June.

Ryan Bell, a student at Oatlands College in Stillorgan, found out he had scored 594 marks out of a possible 600 following a review of the exam papers returned to his school by the State Examinations Commission (SEC).

The 18-year-old, who had applied to study mathematics at Trinity College, said he was “shocked and disappointed” when he received his results in August.

“It [maths] has always been my favourite subject. I have taken extra maths classes in UCD, I have taken part in maths competitions across the country, so to see the H3 in maths – of all the subjects – was really shocking.”

The exam, which is assessed over two papers, went well and Bell felt he had no reason to worry until the day the results arrived.

“I felt really confident after the exam. It was like a normal maths test that I had always done. There was nothing too surprising, I didn’t really have any difficulties with it.”

“I did have a little sneak peek at boards.ie just to see what other answers people had given and I pretty much matched up.”

Bell described how he felt on receiving his results: “I opened up my paper and I saw I had a H1 in English and a H1 in Irish, which I was delighted about, and next I was going to check maths and that was probably my most competent subject – it was always my strongest subject.

“I looked at it and saw that I got a H3. I had always been getting H1s for maths and I had put so much study and effort into it. I was so shocked and disappointed because I was confident I had done a lot better than that.

“I was a bit disheartened for the rest of the day. I messaged my maths teacher and I think he was very shocked as well.

“I asked myself, what if I misread something? What if I made mistakes I hadn’t realised I had made in the exam? I felt as if I had let myself down and I felt I had let my teacher down as well.”

“A H3 was the minimum I needed but if, for some reason, I had ended up with a H4 I would have missed my place in college and I would have had to take another offer or wait for next year.”

He said he was “really elated” when the school confirmed his H3 did not tally with the marks awarded to him by the examiner.

“I am really delighted. I don’t think I am as delighted as I would have been if I got the result on the day. I’ll never get that day back but this has definitely made up for it.”

Bell will join the ranks of the highest-achieving 2017 Leaving Cert students who scored eight H1s in the Leaving Cert once his upgraded maths score is confirmed.

The SEC has established procedures for students who wish to query a grade. Written exam scripts are made available for viewing along with the marking schemes used by examiners as part of this process and the viewing of scripts took place in schools on September 1st and 2nd.

Irish Times columnist and career guidance counsellor at Oatlands College, Brian Mooney says Bell’s experience highlights the importance of checking results – especially if students are surprised at their marks in one subject in particular.

“If a specific result is out of line with the overall trend of your results, it is crucial you apply to review the script. Errors can occur, it’s human nature. For example, as in this case, if someone is getting seven H1s and is getting H1s in applied maths and chemistry, to believe they would actually drop to a H3 in maths is unrealistic. No-one who is performing at that level will drop 30 per cent on one paper if they are performing at perfection in the others.”

“People will know themselves instinctively. This transparency gives students the right to go and look at their scripts, to bring a teacher in and have them look at it. It is good for our democracy and good for our education system.”

Bell was accepted into the mathematics course at Trinity College Dublin and is looking forward to starting university in two weeks time.