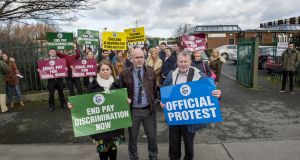 Half of secondary schools are struggling with unfilled teaching vacancies in key subjects such as Irish, maths and science, according to a new survey.

A Teachers’ Union of Ireland (TUI) poll of principals and deputy principals in 120 of the State’s secondary schools over the past fortnight indicates that many are being hit by a “recruitment and retention crisis”.

TUI president Séamus Lahart said it was clear that graduates who might formerly have chosen teaching are now looking at other options.

Almost half – 47 per cent – said they still had unfilled teaching vacancies.

The survey of 120 schools – equivalent to a sixth of the total number of second-level schools in the country – was carried out by the TUI’s association of principals and deputy principals.

Mr Lahart said the findings illustrated the difficulties that school management are facing on a daily basis.

“Schools in both urban and rural areas are routinely struggling to attract applicants to fill vacant positions,” he said.

The TUI said pay discrimination for teachers hired after 2011 was having a damaging effect on the education system and the service to students.

While Mr Lahart said progress had been made in terms of addressing the issue recently, he said entrant teachers remained on lower pay scales in their first few years following their initial appointment.

“The two-tier system continues to have a significant negative effect on the attractiveness of the profession and on the recruitment and retention of teachers,” he said.

The union is calling on the Government to remove the differences in pay between those appointed before and after January 1st, 2011.

“With changing demographics requiring an additional 2,000 second-level teachers in the system in the next six years, these problems will greatly worsen unless the right actions are taken,” he said.