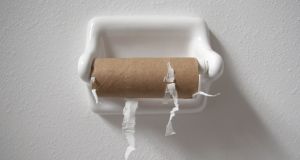 Committee chair Fiona O’Loughlin, a Fianna Fáil TD, said she was aware of parents who were asked to provide essentials such as toilet roll on a regular basis. Photograph: iStock

Some school principals are asking children to bring toilet rolls with them because their schools are under such financial pressure.

The claim was made an Oireachtas education committee meeting on Thursday which heard that State funding is falling well short of the real cost of education at primary and second level.

Committee chair Fiona O’Loughlin, a Fianna Fáil TD, said she was aware of parents who were asked to provide essentials such as toilet roll on a regular basis.

“It’s unfair on parents and pupils,” she said. “It’s also difficult for schools - they don’t willingly put pressure on parents.”

The committee heard from school management bodies and education partners that Government underfunding had reached crisis point and there was “immense pressure” on parents to fill the financial gap through voluntary contributions.

TDs and senators said the practice of seeking funds from parents made a mockery of the “free education system” and called for capitation fees - which were cut during austerity-era funding cuts - to be urgently restored.

Independent senator Lynn Ruane said the underfunding of schools was likely to flout provisions of the Constitution which guarantee free access to primary education to all children.

She also criticised schools for adding the cost burden facing parents through their requirement for crested uniforms, gym kits and crested polo shirts.

In particular she said some schools and teachers were “shaming” low income children whose parents are unable to make ends meet.

“Children already feel the shame. They watch their parents struggle and the teachers further shame them in the classroom, make them stand up and ask why they don’t have their book money,” she said.

“One teacher asked a child, ‘it’s children’s allowance tomorrow, so why not tell your mother to pay for it?’. Another child - an eight year old - asked her parents, ‘are we poor?” she added.

“Schools needs to stop shaming children in the classroom, or door-stepping them in front of other parents to ask them about money,” she said.

A survey of almost 1,800 parents by the National Parents’ Council at primary level indicated that most parents (76 per cent of respondents) are asked to pay a voluntary contribution each year to help with school finances.

A majority of parents (54 per cent) feel under pressure to pay the contribution. This is likely to be linked to the fact that most schools do not anonymise the voluntary contribution request.

Áine Lynch of the council said the practice raises “serious questions as to how voluntary this contribution is in reality”.

It also found a lack of transparency on financial issues in schools, with one in three parents stating they did not know how the contribution was spent.

The National Parents Council post primary also said many voluntary contributions were effectively compulsory, despite the directive banning this by the Department of Education.

Geoff Browne of the council said it frequently received calls from “distraught” parents to report their children have been denied lockers at school or were not allowed to participate in school activity because their parents were unable to pay the voluntary contribution.

He said the reduction of capitation funding by the Department, particularly during the economic downturn, has made matters significantly worse.