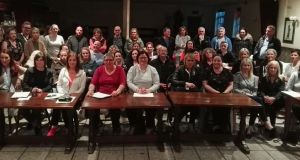 Parents of children at Ratoath College at a meeting on Thursday night who expressed concern over the school’s ‘iPads-only’ policy for junior cycle students.

The principal of Co Meath secondary school at the centre of a row over the amount of time pupils are spending on screens has defended its iPads-only policy for students.

More than 50 parents gathered at a meeting on Thursday night to voice their concerns about what they say is an over-reliance on digital technology since the policy was introduced for junior cycle students in recent years.

Some parents are now refusing to buy the €500-plus devices for their children and say they will stick with textbooks.

However, principal of Ratoath College Oonagh Prendergast said that while she appreciated the changes were raising concerns for some parents, the school was seeking to meet the needs of students emerging into the “rapidly changing world of the 21st century”.

She said the school’s “progressive vision” has been commended in many recent school inspections.

Ratoath College was selected to be one of the lead schools in the rollout of the Government’s digital learning framework in recognition of its commitment to innovation and creativity, she said.

Ms Prendergast said “21st century skills” such as collaboration, creativity, critical thinking and problem-solving “cannot be taught from a textbook”.

“ The focus of learning has now shifted to the process of learning rather than the retention of content,” she said.

“We as teachers therefore have to adapt our methodology and look for new means of engaging students in ways that are meaningful to them in the context of the world in which they live and the technology that permeates their lives.”

However, a spokesman said decisions on the use of devices are a matter for individual schools.

Ms Prendergast said there had been extensive consultation with parents ahead of the introduction of devices in 2014.

“We are now five years down the line and in that time, these students have very successfully completed the Junior Cycle, in 2017 and 2018,” she said.

A more recent consultation showed there was a “significant minority” of parents who were concerned about this change, Ms Prendergast said.

On foot of this, the schools’s board is to review the digital learning policy in the school between now and December.

Most parents at Thursday night’s meeting said they were not against the use of technology, but said their children should not be totally reliant on iPads for learning.

Nicola Kearns, a mother of three and a former teacher, said the devices were a source of distraction for children and resulted in poorer learning outcomes.

“They don’t learn effectively on screens. And their level of maturity is such that if you leave them to do homework on an iPad, inevitably they’ll be on YouTube or social media, and why wouldn’t they? It’s not their fault. Professionals have allowed this to happen,” she said.

Angela Kaya, another mother of three, said she was determined that her son who is due to start school in September will not be reliant on using an iPad for learning. “I know they’re seen as trendy and the way forward, but they are spending too much time on screens,” she said.

“They don’t learn as well, or retain as much using screens. They can’t take notes the way they can with books. There are too many distractions.”